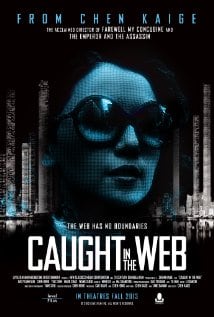 [xrr rating=2.0/5]The pun embedded in the title of Chen Kaige’s latest feature, Caught in the Web, is as close as the film ever gets to satire. It wryly recasts the interconnectivity that spawned the Internet’s nickname as a web of a more literal kind, ensnaring anyone unfortunate enough to get caught up in even the most minor scandals and further tangling them as they struggle to clear their names. Ye Lanqiu (Gao Yuanyuan) finds herself the latest victim of this predatory cycle when, riding the bus home after receiving a cancer diagnosis, she is too distracted to give up her seat to an elderly man, an action that shocks the other passengers and, thanks to a phone video taken by budding journalist Jiaqi (Wang Luodan), seemingly the rest of China.

For the first half-hour or so, Chen’s film adequately paints a portrait of how traditional and social Chinese media feed off one another for ratings and page-views, a collusion that looks all too similar to our own journalism’s current state. The primary difference between the two, however, is that Chinese media aggressively defends the traditional values encouraged by the communist state, latching onto Ye’s impropriety for its breach of elder respect and good manners. Soon, Ye even finds herself accused of having an affair with her boss, Mr. Shen (Wang Xueqi), whose initial support for his executive secretary crumbles as he attempts to save face before a lucrative business deal. All of this is egged on by the head of Jiaqi’s news team, Ruoxi (Yao Chen), an ambitious young journalist who hopes to rise to prominence on the back of this story. Allowed to organize a debate of talking heads on the video for national news, Ruoxi preps the “experts” beforehand by encouraging them to disagree with each other on everything, all the better to stir up drama, and viewers.

Soon, however, Caught in the Web starts to entrap entire plots, not just people. The film turns away from its critique of unforgiving comment boards and manufactured outrage to become an entangled romantic drama, in which the film’s previously established characters unconvincingly turn all their attentions to matters of the heart. Often, this crowds out other, potentially relevant subplots; for example, Shoucheng (Mark Chao), Ruoxi’s boyfriend and cameraman, could have inadvertently brought Ruoxi the same kind of Internet harassment that she brought Ye when he loses a phone containing illicit photos of his girlfriend, but instead that subplot is quickly resolved with a bit of violence the film not only justifies but uses to bring Ruoxi into Ye’s life as a possible paramour. Other times, both the aborted plotline and the one that remained are useless, as in Mr. Shen’s frequent, interminable meetings with an American investor giving way to a move at reconciliation with his wife (the director’s own wife, Chen Hong, who plays a hyperbolic shrew at the heart of one of the flimsiest, most transparently innocent Big Misunderstandings in recent years).

Perhaps Chen had his hands tied by censors, unable to take his indictment of the digitalization of judgmental Chinese society to its logical conclusion, thus preventing his satire from being such as the film un-ironically endorses the business and personal values of the status quo. But even the aesthetics are conservative: the editing could be said to ape the rushed pace of digital life, with numerous cuts often employed during the course of a single line of dialogue, were it not for the traditionalism of the shot/reverse shot patterns that the erratic cutting upholds. The same holds true for the compositions, which are too colorful to be reflections of a sleek modernity but not a tenth so bold as the director’s earlier, more chromatic films, to say nothing of its purely functional blocking. Only once does Chen ever suggest some of his old spark, when Ye walks out of her modern apartment to stand on her balcony, revealing her complex to be made of cement, state-enforced simplicity matched with the trendy, capitalist form of uncluttered living. Jia Zhangke could wring an entire film out of that juxtaposition, yet in Chen’s movie it seems an impromptu, almost accidental insight.