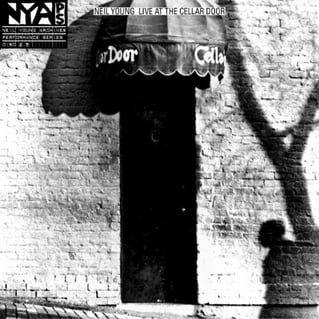 [xrr rating=3.25/5]So the question is: how much Neil Young do you need? Or more precisely, how much live, solo, acoustic-guitar and piano Neil Young do you need from between 1969 and 1971? Because that’s the era of the Live at Massey Hall disc from last year, as well as the “Riverboat” live show included on the massive Archives collection released in 2009. It’s also the case with this newest release, a culling of live performances from a five-night stand at the Cellar Door in Washington, DC in 1971. So maybe the question should be: how many live recordings of “Expecting to Fly” and “Tell Me Why” and “I Am a Child” do you need? ’Cause here are more of ’em, kids.

Admittedly, this era of Neil is the pinnacle for many diehard fans, and practically all of his casual fans as well. For a couple of years there, Neil was bouncing from strength to strength: from the heady jams of Everybody Knows This is Nowhere (“Cinnamon Girl,” “Cowgirl in the Sand,” “Down by the River”) to the mostly-gentler musings of After the Gold Rush (the title tune, “Don’t Let It Bring You Down,” “Birds,” “Southern Man”—hell, basically the whole album) and the popular success of Harvest with its trifecta of “Old Man,” “The Needle and the Damage Done” and the title track. For all intents and purposes, Neil couldn’t write a bad song during this stretch, though he did his best with “A Man Needs a Maid.”

Considering all this awesomeness, then, Live at the Cellar Door is a pretty skimpy little release. Barely 40 minutes long, the album contains 13 tracks, most of which fall into the two-to-three minute range. There is little banter between tracks—which is fine, actually—but this means that there is little enough reason to reach for this record rather than the original studio albums, or the Massey Hall disc, which covers much of the same ground.

Make no mistake, the tunes are solid and well performed, with terrific recording quality and a lively, engaged audience. Neil’s voice sounds clear and strong, especially on standout tunes “Don’t Let It Bring You Down” and “Old Man.” Lesser-known tracks like “Expecting to Fly” and “Flying On the Ground is Wrong” are welcome additions to the expected set list. The biggest revelation here is the piano version of “Cinnamon Girl,” one that leavens the guitar crunch of the original into something more tender and heartfelt. This is all fine.

But is “fine” good enough? Frankly, the studio versions of these songs sound richer and fuller and more satisfying than these solo renditions. They’re interesting enough, but the banjo plucking and propulsive bass of “Old Man” and the narcotic percussion of “Don’t Let It Bring You Down” are never so appreciated as when they are absent. Ditto the French horn solo in “After the Gold Rush.” And while a four-minute acoustic version of “Down by the River” is, theoretically at least, interesting, it frankly has nothing on the sprawling, electrified angst of the studio track (or presumably of the many live versions performed by Crazy Horse over the decades).

For fans such as myself—I’ve been listening to Neil since the early 1970s—this album is something of a disappointment. What the world needs is not another live solo acoustic version of “I Am a Child” or “Down By The River” of “Bad Fog of Loneliness.” What the world does need is for Neil to dig a little deeper into the vault to find some truly rare nuggets—maybe some scorching live versions of “Revolution Blues” or “World on a String” or “Motorcycle Mama” or even some—gasp!—previously unreleased tunes. Hell, I wouldn’t mind a CD release of Time Fades Away for that matter, though it doesn’t look like that will ever happen.

But that’s not what we’ve got here. What we’ve got here is a pleasant set of nice tunes played well and recorded cleanly. It’s fine, and it’s Neil, and he sounds good, and in all likelihood you’ve heard it already in some form or other—or at least most of it. If the piano version of “Cinnamon Girl” intrigues you, go for it. Otherwise, wait for something that’s more “crucial” rather than just “fine.”