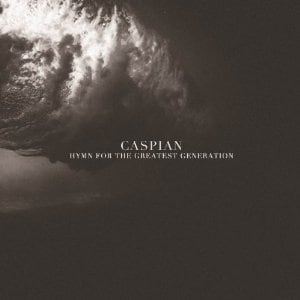 [xrr rating=3.25/5]Memory and loss cannot be separated. Less a hymn than a classical ballade, Caspian’s recent release effectively serves as an elegy for their bass player. Chris Friedrich passed away unexpectedly in August, and although the band pressed forward with their scheduled shows, his death colors Hymn for the Greatest Generation. The first half of the six-song EP features new tunes while the second half offers a demo and couple of remixes of songs from their 2012 album, Waking Season. Even in short form, Caspian’s cinematic side comes out, although it’s never as sweeping and heroic as the heights to which the band has risen in the past.

The title track eases in with ambient tones introducing the thoughtful theme on an acoustic guitar. Soon, an electric guitar appears and completes the feeling of sweet reminiscence. Over the course of the song, the simple motif takes on many different moods as it’s revisited with varying settings. Chained together, these sections form a story: determination in the face of challenges and fine deeds, followed by a spinning loss of direction leading to a bittersweet sense of fading dreams. Finally, the theme is halting and fragmented. Spaces open up and the story reaches the end of the line, where the electric guitar haunts the acoustic and memories fade back into the past. It’s a richly evocative soundtrack.

“The Heart That Fed” has a similar slow start, taking a moment to coalesce from the wisps of aleatoric fog. The soft-focus drifting is like a bomb blast in reverse slow motion, where the track runs back the clock to see why everything flew apart. In this context, the tune reaches a driving rhythm that suggests the conflict before a sharp jump cut forward to the explosion. From here, swirling melodic lines build into a bristling wall of reverberation, underlaid with processed vocals. This moment comes closest to the band’s epic roots, but it retains a contemplative aspect that carries over from the earlier dreamy detachment. The big sound is a sharp contrast to the breathy beauty of the tune that follows. “CMF” centers on a finger-picked acoustic guitar with synth washes and echoes that slide the track into surrealism. It’s safe to say that the tune is a tribute to Friedrich and what he represented for the band. The raw production leaves in the finger squeaks and burdened breathing, which imbues the delicate love song with humanity and grief.

The remaining alternative versions that fill out Hymn for the Greatest Generation bring their own power and perspective. “High Lonesome” is my favorite of these. It shows that the album cut didn’t stray too far from baseline of the demo version included here. Both feature the same slow rising tide of ringing sound. But where the official release suggests a celestial purity, the demo take is darker and more intense. Lower tones lurk underneath the surface and eventually come to dominate with a chaotic distortion burying all sense of comprehension under a thick haze. In the wake of “CMF,” the alluring pain and cathartic oblivion serve as a fitting summation of the band’s loss. That would have been a perfect end to the EP, but the remix tracks serve as an added bonus. Arms and Sleepers tentatively take “Procellous” into a spacier realm, while Lazerbeak (Doomtree collective) sands the rough edges from “Halls of the Summer.” Each has its appeal, but the real impact comes in the first four tracks.