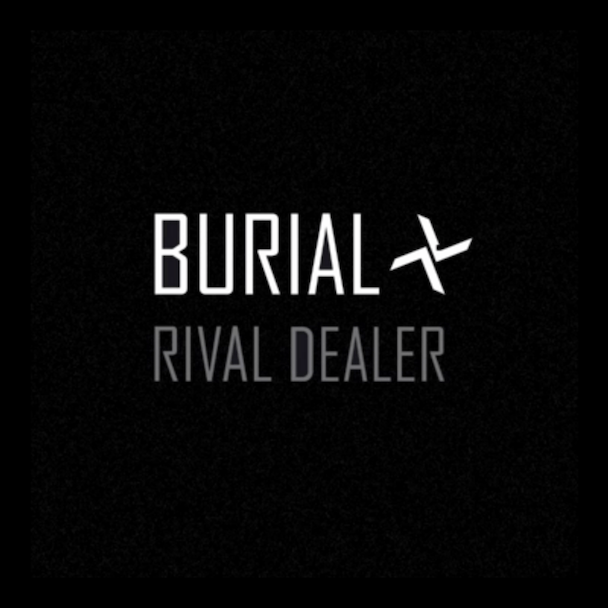 [xrr rating=4.5/5]Who is Burial? Even eight years after London artist William Bevan’s debut under the fittingly cryptic and shadowy moniker the question still arises. But with every subsequent release the answer seems to matter less and less. Burial’s legacy, the one he established with his sophomore record and masterwork, Untrue, was cemented well before the last decade was even over. The ripple effect of its impact has reached as far as mainstream pop music. While the strand of depressive urban dubstep/post-dubstep it seemed to single-handedly create is now a mere memory. But still Burial continues to work in near anonymity, seemingly isolated, ignorant of how the outside world has moved on, releasing bits of music annually like entries in a diary.

Burial’s latest is a three track EP by the name of Rival Dealer and it arrives almost exactly a year after Truant/Rough Speaker, which saw Bevan taking the progressive mosaic beat sculptures established on 2012’s acclaimed Kindred to their logical conclusion. Since Untrue, starting with 2011’s Street Halo, we’ve seemingly gotten to see Burial’s sound evolve in real time. The songs have gotten longer and more complex, perhaps more aptly described as techno than garage, a single 11 minute track like “Ashtray Wasp” off Kindred doing the same amount of work as two or three tracks off of either Burial’s full-lengths. Burial’s default mode has been explorative and restless, as if Bevan has had too many ideas too keep up with and it’s resulted in some of the most thrillingly unpredictable and experiential electronic music currently being released.

Rival Dealer is a change. And a big one. On the surface, Burial seems to be tightening up what he learned from his past two releases, using some of the same ideas to create something a little more pre-rendered. But there’s a fundamental change in disposition here as well. And it’s worth pause. Burial’s an artist who’s all but cornered the market on feelings of loneliness and urban isolation. Burial and Untrue were essentially soundtracks for 2am nights spent alone in fast food joints or looking out the window aboard a bus as the world speeds by. Rival Dealer, on the other hand, explicitly flies in the face of everything Burial’s previously produced.

At least in a thematic sense. Bevan has said he recorded the record with bullied kids in mind and much of Rival Dealer turns the sentiment of “you’re not alone!” into a cooed mantra. Its aim it to comfort. Whereas previous Burial releases felt like the stilled summer air just after a downpour, Rival Dealer is a warm blanket being wrapped around the listener by a loved one. It’s Bevan finally reaching out to touch the listener. It’s two LPs and three EPs worth of guarded anxiety and repressed bursts of emotion finally spilling over into all out tearful catharsis and wonder. And it’s beautiful.

The biggest sonic change is Burial’s approach to melody. The EP starts out familiarly enough on the title track with some buzzy, blood-clotted synths laid atop a clacking drum’n’bass loop like an out of control rickshaw barreling through a packed street. All the while, little dialogue snippets declaring, “This is who I am.” But then everything seems to get quiet. Far off synth melodies start to rotate while mournful vocals stretch skyward until they arrive at a teary, beatless crescendo “Hiders” deploys a new wave-y synth loop, building into a glorious downhill, golden-keyed rush, while a jigsawed vocal sings “You don’t have / to be alone.”

The EP saves the best for last with “Come Down to Us.” The track continues to tread the uncharacteristically huge hearted melodies, weaving in a patchwork of aching vocal cries and motivational, self-actualizing rhetoric, while stop-start crescendos give the track an almost M83-hugeness. The song has two movements — the first a crawling upward Rocky Balboa-esque climb, and the second a shimmering New Age-y plunge. The track reaches the same what-the-fuck levels of puzzlebox technical prowess as “Ashtray Wasp,” the difference is you couldn’t be blamed if you had tears rolling down your cheeks by the end of “Come Down to Us.” Luckily, Bevan is there to wipe them off for you.

Rival Dealer feels like the start of a new chapter in Burial’s career. Bevan is a certified veteran at this point with the credentials to show for it, but with this new EP it’s the first time he’s made an actual statement that hits on any kind of overt, intellectual level. Burial’s production chops have always been undoubtedly sharp, but for him to put the same amount of subtlety and precision into saying something clear and profound (and profound in its emotional clarity) is something else entirely. Who knew Burial was the producer with the biggest heart in the room?