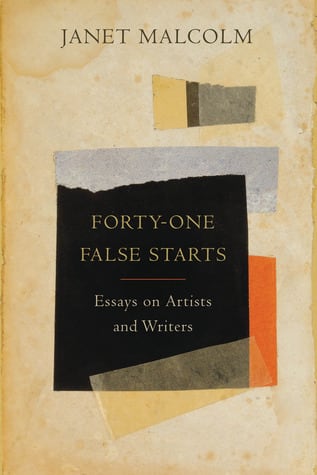 [xrr rating=3.0/5]I don’t enjoy when a book holds me out at arm’s length. I want to become mentally intimate with a narrator, whether the writer’s mind or that of her characters. I need to learn and embrace the subject, whether I’m familiar with it or discovering something new. When a book leaves me out, I resent it. Unfortunately, I didn’t feel at all invited into Forty-One False Starts.

Janet Malcolm is a reviewer of the arts for the “New Yorker” and the “New York Review of Books,” and Forty-One False Starts is a collection of essays appearing in these and other upper-crust publications. Her style is evident from her previous work resume, the eloquent first page and even the clean, quiet cover that looks like an integral stock item from a museum gift shop.

The first essay, the collection’s namesake, is told in fragments. Forty-one attempts at starting an essay on the artist David Salle, who was a wildly popular artist in the 1980s, languishing at the time of their interviews. The succession of fragments creates a murky sketch of a man paralyzed by both his ego and his insecurities, judgmental and prideful while terrified of making mistakes or, worse, being replaced by the rising generation. The essay does not delve far beneath the surface of Salle because he doesn’t allow Malcolm in, presumably resulting in the many attempts to correctly capture him. Clearly, there is no real Salle with depth, at least that anyone else is allowed access. In this superficial, personality brand kind of way, he encapsulates the universal downfalls and fears of artists, a canvas any of his vying replacements would be happy to dive in and fill. By being creative with structure, providing engrossing back story on the fad of Salle’s work and the New York ‘80s art scene, and allowing the incompleteness of the profile to speak in loud white space wells, “Forty-one False Starts” strikes a hopeful tone for creative, fascinating essays to come.

And then, the rest of the essays come.

The remainder of the pieces demand an academic familiarity with the work she is referencing and a PhD qualifying level of interest. Although The Catcher in the Rye would be common enough knowledge to keep her discussion on J.D. Salinger relevant to most literate Americans, her long dissertation on the Glass family had me lost. She continually mentions how “disdained” the Glass stories are, but fails to explain to the reader why, or what was said, or what exactly these stories are about. I felt like I’d shown up to class after skipping my reading assignments for an all-night bar-hop. Similarly, her essay on obscure novelist Edith Wharton does little to provide context as to why she’s chosen to examine what are, by her account, bad books from the late 19th century. The angle that Wharton didn’t seem to care for other women is an interesting one, but it’s underdeveloped, with most of the piece concerning plots and themes of her 100-year-old novels. With every passing essay there seems to be a giant void to beckon the reader into participation: why is this person interesting or relevant to the larger world? Why does the high literary or art class regard them as such? It feels as though a reader is simply supposed to “know” who Thomas Struth is, and if they don’t, they’d best renew their the “New Yorker” subscription.

The problem isn’t in the writing—Malcolm’s sentences are flawless from first to last, and she has a voice so perfect, it verges on condescending. My failure to enjoy this book is rooted in my inability to connect to the essay subjects and their work. What could have been a delightful peek into the lives and minds of artists is, instead, a slog of presumption and pretension.