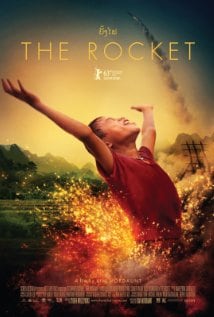 [xrr rating=3.0/5]All triumphant movies are triumphant in their own way. But despite language and culture differences, crowd-pleasing coming-of-age arcs are all alike. Even in Laos. This is what’s both good and bad about writer-director Kim Mordaunt’s The Rocket. The movie’s war-torn Laotian setting, with its beautiful countryside and harsh superstition, is a place thoroughly unfamiliar to Western moviegoers. Australian director Mordaunt immerses us in this new land and its surprising people, only to reveal that the unknown “other” is just like us.

The movie opens in a Laotian village with a harrowing and graphic childbirth. Mali (Alice Keohavong) is giving birth to twins, to the horror of her mother Taitok (Bunsri Yindi), whose tribe sees twins as signs of bad luck that should be killed. One twin dies at birth, but Mali struggles to convince her mother to allow the surviving son, Ahlo, to live.

Ten years later, Ahlo’s family still blames him for a series of misfortunes. When dam construction forces the family to move to a crowded relocation camp, things get even worse. But if camp life finally sends Ahlo (played as an older kid by Sitthiphon Disamoe) into exile, the camp is also where he meets like-minded misfits in the orphan Kia (Loungnam Kaosainam) and an avuncular veteran named Purple (Thep Phongam) named for the James Brown-inspired suit he wears.

Mordaunt’s first feature-length drama, The Rocket grew out of his feature documentary Bomb Harvest. That 2007 film followed an Australian specialist in Laos who trained locals to detonate bombs and tried to stay one step ahead of Lao children who would come across bombs and use them for scrap metal. These undetonated bombs were relics of a U.S. bombing campaign during the Vietnam War, and come to play in the fictional world of Mordaunt’s new film.

All the characters in The Rocket are based on people Mordaunt and his crew met while living and working in Laos. Purple was based on a purple-suited alcoholic who was introduced to westerners in a dramatic fashion when his tribe was recruited to fight in the CIA’s Secret War in Laos. Ten-year old Ahlo may be the central figure, the one who comes of age in The Rocket. But Purple is the film’s complicated moral center, the symbol of a nation’s arrested development and damage under an American influence that dropped both bombs and funk music on unsuspecting shores.

The film’s young leads, particularly Loungnam Kaosainam, are convincing if under drawn, but the supporting roles are problematic despite strong acting. Bunsri Yindi is a formidable grandmother from hell, but her villainous role is perhaps too melodramatic. Thep Phongam is entertaining as Purple, and he bears a strange resemblance to the harder working man of show business (Brown) he emulates.

But his conflict as a man torn between Laotian tradition and Western influence feels contrived, his James Brown dance moves learned all too well from a television that by some magical coincedence launches into a vintage JB clip just as power is returned to that side of the camp.

I’d love to meet the real people who inspired The Rocket. But Mordaunt’s feature debut doesn’t do justice to his own themes. Laos struggles with industrial development, no thanks to influence from the West. This conflict deserves more than a coming of age movie, however triumphant.