I’ve never been overly fond of the terms “overrated” and “underrated.” They imply a superiority on behalf of those who use them, a boastfulness that this one wizened viewer has seen what everyone else has not. Even so, I do enjoy writing under the banner of “underrated” for the purposes of reintroducing ignored or reviled films and filmmakers to discussion. In the case of Abel Ferrara, however, the problem is less one of critical misunderstanding than of outright invisibility. Despite one well-known film to his name, the notorious Bad Lieutenant, Ferrara is a fringe figure whose early films remain mostly unseen thanks to unavailability and whose more recent work has largely eluded American eyes as a result of botched distribution. The net effect is that one of America’s most brazenly iconoclastic, truly independent directors remains a virtual unknown, a problem only just now being rectified with the baby step of Drafthouse Films’ recent restoration and re-release of his 1981 exploitation film Ms. 45.

And an exploitation film it is, like much of Ferrara’s work, which may explain how it fell through the cracks. But Ms. 45, by virtue of now being many people’s introduction to the director, is as good a place to start as any in delineating how the director stretches the confines of exploitation cinema into something more, something explicitly about the very concept of exploitation. Ms. 45 concerns a mousy, mute woman (Zoe Lund) driven to vigilantism by being raped twice in the same day. Fairly gruesome, generic stuff, but Ferrara distinguishes his picture by driving Lund’s character past the point of mere revenge, and even past the point of taking down clearly predatory men. With the film’s revival has come inevitable talk as to whether the film is feminist and empowering, something Ferrara himself has denied, albeit not in a manner that shows contempt for feminism. Instead, he points out that the eventual devolution of the protagonist’s spree from righteous killing to mindless spree is more tragic, a snapshot of a person utterly destroyed by trauma and perpetuating that destruction. It is a complex reading of a film that is, on its surface, straightforward, and it eases viewers into the director’s morally ambiguous, thematically unorthodox work.

It also provides a skeleton key to Ferrara’s deeper motivations in that the director himself plays one of the rapists, a casting choice that reaches beyond the film to implicate Ferrara, and the filmmaking process, in its own kind of exploitation. It is this thread that recurs in Ferrara’s best and most challenging work, a self-reflexive tic that calls into question the nature of performance and the (usually chauvinist) filmmaking methods common to American cinema. It can be best seen in his masterpiece, 1993’s Dangerous Game, a film about filmmaking that sidesteps the usual clichés endemic to that subject matter to baldly suggest that filmmaking is not a creative act but a destructive one, an inherently unseemly profession that is living proof of those old stories about tribes that think photographs take a piece of the soul. And that’s just a single photo; film takes 24 parts a second. That Dangerous Game stars Madonna, a performer who foregrounded the objectification of pop culture and attempted to overcome it by taking it to an extreme, is both a tip of the hat to her own shrewdness and a comment that however ingenious her plan may be, it is a futile one. 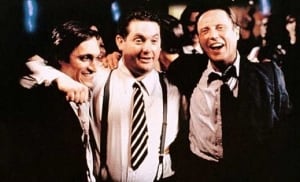 If Ferrara is stealing his performers’ souls, however, he also gets them to bare their all in ways that most would find overbearing. The casts of his movies tend to be marked by a mixture of veteran character actors and unknowns, an unwieldy blend that often manifests as a contrast between stilted, flat deliveries and the completely uninhibited delivery of side players given their chance at a lead. Who else would allow Christopher Walken to say “She’s got a lotta…chutzpah!” the way he does in New Rose Hotel, pausing before he says the last word so he can draw a breath and yell it as if it were an ancient Hebrew curse? Or sit back as Willem Dafoe’s pathetic nightclub owner in Go Go Tales reacts to hope-rekindling good news by his cries of delight turning into literal, cartoonish sobs? The late Chris Penn was always an intimidating screen presence, but never more than in 1996’s The Funeral. Admittedly one of Ferrara’s weakest films, The Funeral nevertheless provides a spotlight for the actor, who steals the entire movie in a terrifying scene in which his affection for a teenage girl turns to raging fury when she tries to prostitute herself to him, screaming “Don’t Fuck with the devil!” as he rapes the young woman. In that instant, the stodgy period trappings that too often suffocate the film give way to something unbearably present, tactile at precisely the moment you pine for the remove of the rest of the film.

Performances likes these manage to be capital-A-C-T-I-N-G while being unpolished and raw at the same time. Such work marks just about the only thing in independent filmmaking that truly warrants comparison to John Cassavetes. Both directors get at an emotional truth through deeply expressive means; Ferrara just adds genre language to his own outsized actors. But then, Cassavetes did the same with The Killing of a Chinese Bookie, of which Ferrara’s Go Go Tales is a spiritual sibling, albeit a dark farce to Killing’s pained tragedy. Other Ferrara movies have similarly tangential relationship to gritty American classics: Bad Lieutenant, with its emotional climax in a church as Harvey Keitel’s eponymous dirty cop confesses in anguish to a vision of Christ, not only conjures memories of Mean Streets but feels like that film’s true conclusion. And his version of the perennially remade Body Snatchers is the one that feels the most universal, depicting conformity as the inevitable conclusion of society, not the invasive, involuntary thing foisted upon individuals; if Philip Kaufman’s adaptation teemed with post-Watergate angst, Ferrara’s is the one most attuned to generational struggle, of the young resisting the conformity of the old until they themselves are the generation aligned against youth. It’s a shrewd comment on counterculture boomers growing up to vote Reagan, but Ferrara’s view is sufficiently bleak as to transcend any set political movement for a total nihilism.

And this is just scratching the surface of a filmography that can be spotty but is revealing in its imperfections and oddities. His ‘80s films have the air of a gun for hire, and a potentially interesting Elmore Leonard adaptation, Cat Chase, currently exists only in a butchered, incoherent form that singles it out as the worst of his theatrical releases. Elsewhere, however, there has never been a vampire movie like The Addiction, even though it seems to contain traces of every vampire movie in its trim 80 minutes, or an apocalypse movie like the unexpectedly tranquil, at-peace 4:44 Last Day on Earth. ‘R Xmas is an urban crime parable that doubles as an elegy for New York’s dangerous days on the eve of Giuliani’s election. His nonfiction work can be even harder to solve, given how much his fiction feels real as is: if you can track down Mulberry St. online, you’ll be treated to a freeform documentary that touches on everything from Italian-American custom to true New Yorker disdain for the city’s sanitization to Ferrara’s own rants about his distribution and money problems. Were it not for a shot in the film of the director reviewing and critiquing footage, it’d be easy to assume he just threw the whole thing together in a day. But that’s what so entrancing about him: Abel Ferrara is one of the only directors who can honestly be called unpredictable, and with upcoming back-to-back biopics that promise to be anything but conventional, one can only hope that the time is at last ripe for this underground maverick to receive his due.