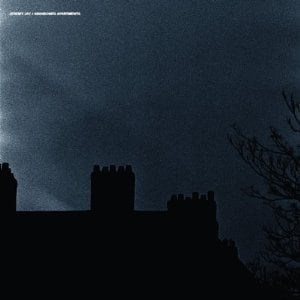 [xrr rating=3.5/5]Back in 2009, Jeremy Jay’s early records could reasonably be compared to the work of Buddy Holly and Gene Vincent, even though his most jangly rock songs remained focused on the glamor and ritz of glossy ’50s songcraft. Even then he was a pop artist more than a purveyor of era-specific rock. Jay has since moved away from that style, prioritizing the lush dream logic that permeates all of his work and became increasingly noticeable by the time Jay released the romantic synth pop of Splash in 2010. Two of his albums directly reference dreams in their titles, so it’s fitting that his music would become increasingly nocturnal, abstract and wistful, even as it incorporated doo-wop, then took on ’90s MTV clatter, finally culminating with the appropriately complex sensibilities of 2011’s Dream Diary.

Abandoned Apartments – Jay’s sixth full-length – moves even farther away from the stark sound of his early records in favor of a languid synth-pop style set in twilight that finds Jay sounding more relaxed than ever before. His delivery is notably sedate – the instrumentation pulsing along with a heavy, begrudging pace, and Jay himself casting off lyrics with a relative lack of force or emotion (even for a vocalist as dry and monotone as Jay tends to be). On “Sentimental Expressway” he sing-speaks over flashes of neon synths, his vocal on “The View from the Train Window” a wondering croon, and on “Abandoned Apartments” the muscular bass line is far more boisterous than Jay’s echoing moan. That’s not to say Abandoned Apartments sounds like Jay doesn’t care. He may sound detached, but these songs are continuously flowing, unnervingly steady and drenched in atmosphere. As a practiced pop stylist, Jay is adept at establishing a narrow stylistic vision and this approach – an extreme continuation of the smooth, late night sound Jay introduced on Dream Diary – is vital to the way Abandoned Apartments resolves as a whole.

While the focus of his albums has increasingly turned towards the tenuous realm of reverie and illusion, Abandoned Apartments often invokes the haze of memory more than it does sleepwalks through the streets of a A Place Where We Could Go. In part, that’s because of all the lyrical references to the mundane: grinding coffee beans and rearranging magazines for the “Graveyard Shift,” catching a train to navigate the city, talking at a red light and going inside because of rainy weather. Details like these tether us to the events that we remember, spectral versions of what actually occurred represented by those most basic daily happenings. Then again, songs like “I Was Waiting” or “Covered In Ivy” are overtly hypnotic and just as frequently trade in surreal imagery (“We were standing by the river/ We were sticking our memories in bottles and carrying them along“). Thematic sensibilities aside, Abandoned Apartments is consistently lovely and darkly gorgeous, and a mysterious stillness makes these songs among Jay’s most enchanting, even if some of the more cryptic lyrics (“We are the starlight brothers/ Synced in time”) are a bit impenetrable. The truncated melodies here are variations on the same tone and ideas – long, thumpy bass lines bonded to twinkling piano and erupting spires of guitar – a sensual pop experience that builds on all of Jay’s songwriting to date.