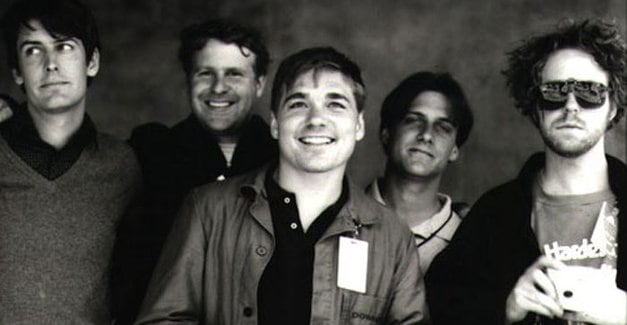 As we get acquainted this month with Wig Out at Jagbags, we decided to take a look back at Stephen Malkmus’s pre-Jicks discography – you remember, a little Cali band called Pavement. Read on as staffers Stacey Pavlick and Mike Randall celebrate some of Malkmus’s finest poetry/non sequiturs. Either way you call it, here are some words that resonated.

“Out on my skateboard the night is just hummin’/ And the gum smacks are the pulse I’ll follow if my Walkman fades/ But I’ve got absolutely no one, no one but myself to blame.”

SP: This is such a utopian verse to me, the melody of that opening phrase so loose and copacetic, like something you’d absently hum to yourself on a summer’s sundown. Slacker meets bodhisattva: when those batteries die and the music cuts out, time to tune into that internal white noise. Identify the freedom in self-blame. Sometimes a wad of gum and the sound of street-pitted wheels rolling over macadam is the only back-up plan you need.

“There is no castration fear/ In a chair you will be with me.”

MR: Slow, steady and straightforward, Malkmus opens Wowee Zowee singing tenderly and with melancholy above an acoustic passage that mimics Neil Young’s “Down by the River.” This line is the first we hear from Malkmus on the record, just a few words yet so amazingly visual. The world might be falling apart around him, incest might be in the works, or most likely, he’s referring to a stripper.

“I was dressed for success/ But success it never comes/ And I’m the only one who laughs/ At your jokes when they are so bad/ And your jokes are always bad/ But they’re not as bad as this.”

SP: Malkmus is king when it comes to loose-limbed noodling but “Here” refuses all of that, meditating instead on the solemnity of a repetitive guitar pattern that inspires a fugue state. The tension in this verse between half-kidding and being totally fucking serious is what makes that last word land with a gulp and demoralizing thud. As if you didn’t get it already – “Everything’s ending here.” “Here” was the closer on their 2010 tour setlist, so I guess that’s when Pavement officially broke up with all of us.

We Are Underused (Brighten the Corners)

“Let’s drink a toast/ It’s the most I can stand to cry/ About the mental energy/ You wasted on this wedding invite.”

MR: One of Pavement’s simpler and more overlooked songs, its apparent meaning of wasted potential seems ironic given the band’s maybe-later reputation. Yet here it doesn’t seem to be biographical, instead referring to the banality of middle class existence, where activities like wedding planning take on life-or-death implications. It’s a slow burner with a big chorus, punctuated with a Malkmus solo above the band’s “Hey Jude” style chant of the title as a send-off.

SP: The last Pavement song on the last Pavement album—yeah, I’m looking for a message. With all of the anecdotes about in-fighting and the implication that Terror Twilight is for all intents and purposes Malkmus’s first solo album, I want to believe that “Carrot Rope” represents some sort of peace accord amongst the members and tip of the cap to the fans. An overlap of vocals from Malkmus, Mark Ibold and Spiral Stairs, the squelchy opening verse is a laid back smile that disowns whatever shittiness happened before. “Don’t waste your precious breath explaining/ That you are worthwhile”: guys, that’s all I wanted to hear.

Transport Is Arranged (Brighten the Corners)

“A voice coach taught me to sing/ He couldn’t teach me to love.”

MR: One of Pavement’s most melodic songs is also one of their most absurd. There are so many classic Malkmus lines here that the entire lyric sheet could be printed without argument. This one stands out not only for being utterly ridiculous yet brilliant, but also for the fact that with near certainty we can be sure Malkmus didn’t have a vocal coach.

Unseen Power of the Picket Fence (No Alternative compilation)

“‘Time After Time’ was my least favorite song!!”

SP: Only Pavement would put a diss in a tribute song—but a diss so lovingly contextualized, it ceases to even be a diss. This valentine to R.E.M. appeared on No Alternative, an invaluable ‘90s alt-rock compilation. Name-checking the songs of Reckoning and positioning the band as witnesses to Sherman’s march through Georgia, “Unseen Power of the Picket Fence” casts Stipe & company as timeless superhumans disguised as fallible mortals. They may pre-date the Civil War, but in all honesty, “Time After Time” kinda does suck.

MR: Pure energy in this one, a Northern California anthem in the Civil War sense. Its soaring octaves and driving rhythm made this a live force, but even on record the angst is apparent. This gem of an insult is the closing chapter of Malkmus’s own personal geography course.

“Is it a crisis or a boring change?”

SP: Dubbed Pitchfork’s #1 song of the 1990s, “Gold Soundz” is quintessential Pavement: part shimmer, part quiver, part gallop, mostly inscrutable but totally relatable. Malkmus, as ever, is the wry observer, simultaneously detached and self-aware. “Is it a crisis or a boring change?” pretty much is the central question of all of history (be it global or personal), and it’s perfect that it’s dropped here in a succession of fleeting thoughts.

Starlings of the Slipstream (Brighten the Corners)

“The language of influence is cluttered with hard, hard C’s/ I put a spy cam in a sorority.”

MR: Malkmus’s guitar and voice always have such an interesting dynamic, and here he’s almost playing call and response with himself. What this line means is anyone’s guess, but this song is said to draw influence from Revenge of the Nerds, and this passage seems to offer validation. Slacker poetry at its finest.

“You kiss like a rock/ But you know I need it anyway/ Angle for the ringside seats/ When they fall, don’t blame me.”

SP: “Major Leagues” is the sad pillow of this album, a depressive anthem perhaps for those who exhibit flat affect. This is a song that understands that when the best you can hope for is a soft failure, you might just get what you want. It helps that this takes place in a dreamy haze, Malkmus delivering us gently into the embrace of indifference.

“I know arks can’t fly/ I know the sharks, they don’t have wings.”

MR: Rumors seem to suggest that this song is about Jennifer Herrema from the band Royal Trux, but this line may suggest otherwise. Perhaps an ode to a Rose Bowl queen who really might not have it all together, Malkmus implies that he doesn’t know much, but he knows the obvious. Obviously.