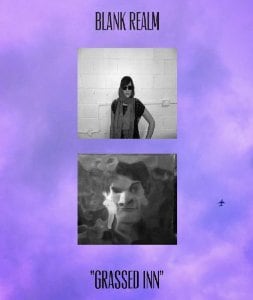 I really want to love Blank Realm and welcome Grassed Inn into my heart. For all its simplicity, their exuberantly poppy post-punk has a golden spark of magic. It’s hypnotically repetitive and startlingly direct, with intriguing splashes of Velvet Underground and Tom Verlaine’s Television. But before I can fully consummate or commit, Daniel Spencer’s nasal whine diffidently drills into my brain, sabotaging all the pretty musical endorphins. It’s not like the bar is necessarily that high: neither Lou Reed nor Verlaine is a mellifluous, traditional singer. But where a band like Pere Ubu could wield David Thomas’ quirky yelp as an artistic tool, Spencer seems content to rely on a sloppy, Dylanesque yowl. Emphasized by the low-fi, muddy production, it’s hard to escape or ignore. But just as annoying, every time I’m ready to throw in the towel and turn it off, Grassed Inn offers up a beautiful musical phrase to distract and calm me: a spangled blur of psychedelia, a dizzy pop swirl or a crystalline glint of synth melody. Somehow it’s enough to tip the balance and suck me in for another listen, especially with tracks like “Bulldozer Love,” which completely overpowers the vocals for the win.

In fact, “Bulldozer Love” and its predecessor, “Bell Tower,” form the musical engine for the whole album. “Bell Tower” lays down a moody, new wave riff and caresses it with pensive tremolo waves. Spencer’s voice shifts the balance to garage psychedelia, but it works here. The organ on the chorus perfectly matches the mood, but could stand to be more pervasive on the tune. The opening phrase is repeated like a prayer, providing a wisp of comfort, but the chorus admits the truth, “Bell tower in my brain/ You’re driving me insane.” The prayer becomes an obsessive sign of inner anguish as the tune builds to its inevitable psychological collapse. The transition to “Bulldozer Love” promises relief as the psychedelia turns more cheery. The hook is set with an insistent beat and a repetitive run of chords soaked in acid-washed echoes. The keys slide in surreptitiously to add a subliminal ‘80s synth-pop undertone. Spencer’s sister, Sarah, softens the vocal tone with her harmonies as the chorus chant, “Your bulldozer love,” becomes a mantra. The meandering chords loop around and transform into hazed out angles for the song’s sonic maze. Spencer sounds more plaintive than distracted, which helps make this the standout track of the album, from its gentle delay-box ringing at the start to the swirling, overdriven guitars and freak-out keyboards at the finish.

If Grassed Inn could deliver that kind of one-two punch across the whole album, I’d have a new favorite band. Unfortunately, despite catchy moments and hints of musical bliss, the rest of the tracks are flawed in one way or another. The second half of the album ushers in a promising electronic aesthetic, but it’s not enough to rouse the songs. On “Violet Delivery,” the motorik thump and flood of electronica tricks ’n’ treats throw the album into a new dimension, but once the intro wraps up, the track loses its momentum as the repetitive changes and relentless droning vocals take over. Where Velvet Underground could turn a couple of simple chords into a hymn and build a tapestry of free verse lyrics in songs like “Sister Ray,” Blank Realm never seems to make any point at all here beyond the non-message of emphasizing the title words. It’s easy to find small elements that are shiny enough to attract, but the band doesn’t seem to know what to do with them.

It’s frustrating because those sweet sounds and a couple of exquisite tracks can’t lift Grassed Inn up to the band’s promising potential. Maybe it’s a case of capturing the output from an infinite set of musical monkeys; Blank Realm is sufficiently savant to populate the project with great fragments, but they can’t quite recognize the wheat from the chaff.

For all the talk about fearing the unknown, when it comes to reading, people have a streak…