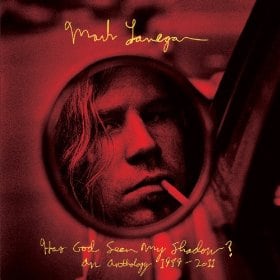 [xrr rating=3.25/5]What’s the most loathsome aspect of best-of compilations? If it’s not the manner in which they strip away context endemic to the songs’ placement on their home albums, it’s surely the way fans’ loyalties are exploited by compelling them shell out a disproportionate amount of cash for a new track or two. Always an artist to flout conventions, Mark Lanegan sidesteps this common blight with his first career retrospective, Has God Seen My Shadow?. A double album, the first disc is the token assortment of highlights from his first six solo LPs, while the second features 12 previously unreleased tracks. In this sense, one can view the document as a new album with a bonus disc of favorites, more a gift to fans than an attempt to rake in cash.

That Lanegan is releasing a compilation at all is baffling. The man’s a quintessential cult artist, his dalliances with mainstream success coming with former group the Screaming Trees and frequent collaborators Queens of the Stone Age, rather than with the work released under his own name. His solo oeuvre, which contains his strongest material, is likely owned in its entirety by his fans, who are devout and not that conducive to owning but one or two of his records. Adding to the confounding nature of this release is that disc one’s tracklist conspicuously avoids capitalizing on Lanegan’s rock leanings. True, the vast majority of his work is of the rural, hardscrabble blues-country-folk vein, but with transitional record Bubblegum — the last of the albums culled from here — Lanegan regained some of the rock edge and began dabbling in experimentalism. The first four songs here come from Bubblegum or, in the case of “Mirrored,” a single’s b-side, yet omitted are the descent through industrial paranoia that is “Methamphetamine Blues,” the skuzzy burning PJ Harvey duet “Hit the City” and the dread-dripping ode to graveside fidelity “Wedding Dress.” Instead, there is the one-minute sparseness of “Bombed,” the harrowing and reflecting “One Hundred Days” and the dark, verboten romance of “Come to Me,” where PJ Harvey floats up.

Thus, if Has God Seen My Shadow? had been contained to just the first disc, it’s questionable who the target audience would be. It’s a fine sampler of Lanegan’s solo output, rife with solemn soul-searching, existential regret and yearning and biblical allusions, but not what the average QOTSA fan would gravitate toward, and it would be entirely superfluous in any Lanegan fan’s collection. Its tracklist also curiously flows, with few deviations, in reverse chronological order and omits many of his most notable songs (how a Lanegan compilation can fail to include the vulnerable but resilient “Stay” or the slow-burn frenzy of “Borracho” is a mystery). The highlights are certainly the barren sweep of “One Way Street,” the eerie, vibraphone-led Leaving Trains cover “Creeping Coastline of Lights” and the spaghetti Western fatalism that is “Pendulum.” All told, the disc showcases but one of Lanegan’s many nuanced sides, and serves as an apt soundtrack for digging in to a dark night of the soul, with only some strong drink for accompaniment.

The real gem of the set is the second disc, a hodgepodge of rarities spanning Lanegan’s career. Commendably, the assortment skips most of those tunes diehard fans likely already scrounged up and goes for truly obscure numbers. At the same time, it is clearly a grab-bag of odds and ends and lacks the true cohesiveness of a proper album, so there is a lack of consistency or tone across the disc. With some of the tunes, it’s understandable why they were previously scrapped, while others should have been released long ago.

In the latter camp is “Leaving New River Blues,” a tale worthy of a fleeing gunslinger presented with a rhythm built upon shackle dragging and coin jingling. Lanegan’s inimitable voice, weathered like the offspring of leather and velvet, sounds as though it is coming up from the gravel and stone a beleaguered chain gain is working on with pick axes. The pensive “Halcyon Days” too is vintage Lanegan, a wheezy accordion, cooing vocals and minimal piano notes backing him as he offers up the weary ambivalence of, “So these are the halcyon days/ I do my suffering tomorrow.” Probably the most memorable song though is the cover of John Cale’s “Big White Cloud,” sensuous guitars and hypnotic percussion providing an opulence that swells, crests and breaks in level of grandeur not typically associated with Lanegan. One of the songs likely to be the most revered by fans’ is “Blues for D,” originally an austere and pathos-evoking instrumental on Field Songs, presented here with lyrics. Lanegan’s haunted delivery recalling boarded houses and a resigned farewell to friends gives additional weight to the already lofty tune.

On the quirky front is the lo-fi “Following the Rain,” the music of which indicates it was an early sketch of “Carnival” (available on disc one for comparison) and “A Song While Waiting,” featuring the singer’s voice phased to craft some light psychedelia. The acoustic “Grey Goes Black” is intriguing for (almost) sharing the same name of another recent Lanegan song, though the shared title is all they have in common. Wrapping it all is a live version of Jackson C. Frank’s “Blues Run the Game,” which has a more bittersweet vibe than the defeated and desolate one on the studio rendition Lanegan recorded with the Soulsavers. What makes the song doubly rewarding is that when a technical glitch occurs midway through and cuts it short, Lanegan uncharacteristically engages in jocular banter with the audience before giving in to their request that he pick up the tune where he had left off. It’s a charming moment, and an entirely appropriate manner to end the unorthodox anthology.