May 06, 2021
Home Music Sharon Jones and the Dap-Kings: Give the People What They Want 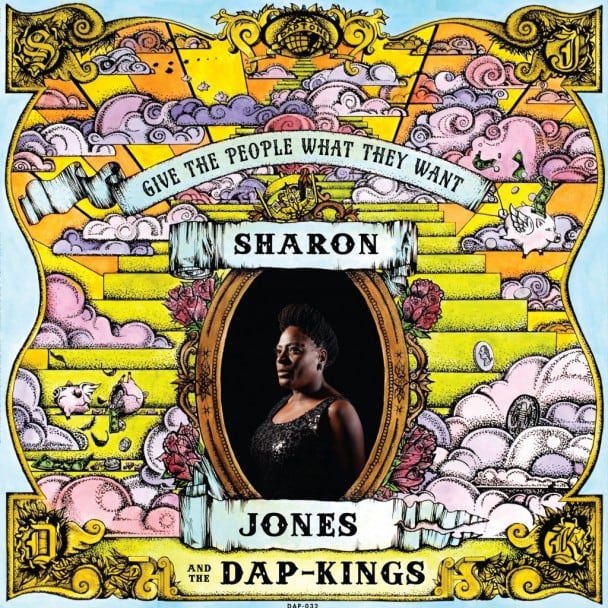 [xrr rating=3.5/5]The opening moments of Sharon Jones and the Dap-Kings’ fifth LP Give the People What They Want are sure to sound familiar to anyone who has heard Jones’ previous four albums. All of the Dap-Kings ingredients are there: active, percussive bass line? Check. Soulful shuffle groove? You bet. A powerhouse horn section? Yep. Jones’ in-your-face vocals? Hell, yeah.

Just because Give the People What They Want isn’t particularly original doesn’t mean that it’s not powerful. Jones and her band of soul survivors are as vivacious and tuneful as ever. The group’s artistic consistency is admirable, especially given the fact that 2013 was a personally trying year for Jones. The record was supposed to be released in August 2013 at the front of a large-scale tour. Both tour and album were postponed until the New Year after Jones was diagnosed with pancreatic cancer. It seems that the singer has approached this dismal diagnosis with the same spirit of undaunted perseverance that she has brought to her music career. Give the People What They Want is filled with the sounds of gritty determination.

Beyond the optimistic, peace-filled lyrics of tunes like “We Get Along,” the Dap-Kings’ analogue sonic texture emanates warmth and humanity. The band lives at the crossroads of Stax, Motown and the Muscle Shoals sound, and they proudly proclaim their influences for all the world to hear. Backup vocalists Saundra Williams and Starr Duncan (known as the Dapettes), invoke the playfulness of 1960s girl groups on “Making Up and Breaking Up.” “Get Up and Get Out” sounds like the Staples Singers at their most sassy and motivational. The meaningfully meandering bass line on “Long Time, Wrong Time” is right out of the Funk Brothers’ playbook.

Of course, not every track on the record radiates peace and love. Tunes like “You’ll Be Lonely,” “Retreat!” and “Long Time, Wrong Time” wallow in heartache and retribution for “done me wrongs” (“Taking you apart/ Is my kind of fun,” Jones growls on “Retreat!”). These edgier tunes don’t feel out of character with their sunnier counterparts because they too exude a spirit of toughness, wisdom and survival. Like the songs of love and hate on 2010’s I Learned the Hard Way, these tracks take the listener on an emotional journey through the depths of despair and the highs of true love.

Admittedly, the Dap-Kings’ musical palette is limited by nature, and towards the end of the record, one might be ready to hear something that deviates from Jones’ southern soul-derived songs. “People Don’t Get What They Deserve” is a fine tune with an important message, but the aggressive gospel-choir on the chorus wears out its welcome just a bit. At only 30 minutes and 10 tracks, though, we barely get too much of a good thing. After closing track “Slow Down Love,” you may find yourself ready to start the whole cycle of soul over again.