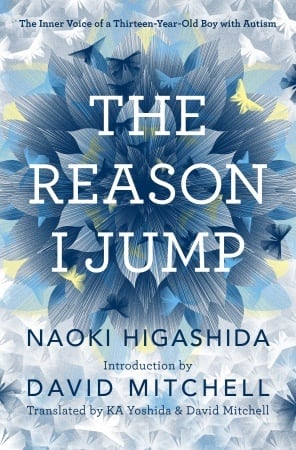 [xrr rating=3.75/5]Autism is so common today that it is becoming increasingly rare to meet someone who has not been impacted by the neurodevelopmental disorder in some way. Nevertheless, despite a myriad of scientific studies, many aspects of the disability remain a mystery.

Thousands of books have been written with the intent to demystify the disorder, to help readers understand the unique challenges faced by people with autism. The Reason I Jump is the latest attempt at enlightenment, though it sets itself up as a different sort of book from the start. It is not a scientific study, nor is it an attempt to explain autism logically. Rather, it is a memoir of sorts written by a Japanese teenage boy with autism. Naoki Higashida was 13 years old when he wrote the text. Because he was a nonverbal communicator, the book was written by spelling out words on a board full of letters.

The Reason I Jump was quite successful upon its initial Japanese release in 2007. It has been translated and re-released for an English-speaking audience because of the efforts of KA Yoshida and David Mitchell, author of the novel Cloud Atlas and the father of a child with autism. The book is structured as a series of short chapters, each beginning with a question that Higashida says is commonly asked of him by neurotypical people (e.g. “Why do you take ages to answer questions?” “Why do you like being in the water?” Would you like to be normal?’” “Why don’t you make eye contact when you’re talking?” “Why do you move your arms and legs about in that awkward way?”).

Some of Higashida’s answers are insightful, even poetic. For example, when answering the question that inspired the book’s title, the teenage boy says, “The motion makes me want to change into a bird and fly off to some faraway place. But constrained by ourselves and by the people around us, all we can do is tweet-tweet, flap our wings and hop around in a cage.” Those looking for a scientific or sociological explanation of this behavior will of course walk away disappointed. Higashida’s answers don’t always make perfect logical sense, but they embody a certain amount of pathos in helping the reader understand what it feels like to have autism.

It’s easy to be frustrated with Higashida’s continual use of the collective pronouns “we” and “us.” For example, when asked, “What causes panic attacks and meltdowns?” Higashida replies, “One of the biggest misunderstandings you have about us is your belief that our feelings aren’t as subtle and complex as yours. Because how we behave can appear so childish in your eyes, you tend to assume that we’re childish on the inside, too. But of course, we experience the same emotions that you do.” One could criticize Higashida for sounding like he is speaking for all people with autism and generalizing about neurotypical individuals’ perceptions of the disorder. One has to consider, though, as David Mitchell writes in the introduction, “remember [Higashida] was only thirteen when he wrote [the answers].”

Despite the imperfection of the writing, The Reason I Jump is a powerful, enigmatic reflection that encourages empathetic understanding for individuals with autism. If it starts conversations or inspires readers to investigate the complexities of autism further, it can be considered a success.