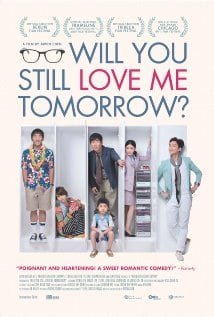 [xrr rating=3.25/5]Though a Taiwanese film, Arvin Chen’s Will You Still Love Me Tomorrow? begins like a Chinese New Year comedy, all broad humor poking fun at contemporary mores. Weichung (Richie Ren) and Feng (Mavis Fan) are introduced as an ordinary couple with jobs so ordinary they slip into absurdity: Feng must suffer the passive-aggressive scolds of her office manager, while Weichung’s relatively better situation, inheriting the management of an eyeglasses shop, is so transparently empty that the old boss literally floats away in bliss at having unloaded this unexciting career. The couple’s settled, comfortable relationship, indicated by Feng asking her husband to leave the bathroom while she pees yet continuing to talk to him as he stands in the doorway, is contrasted with the impending nuptials of Weichung’s sister Mandy (Kimi Hsia) and her fiancé San-San (Stone), a stressful affair that has the assertive Mandy yelling at photographers and dragging around San-San as if he were her child. While not as freely antic as one of the genre’s usual entries, the film looks poised to be a warm, goofy riff on marriage.

Then, at Mandy and San-San’s rehearsal dinner, Weichung uses the restroom and finds two men sharing the same stall, one of whom, wedding photographer Stephen (Lawrence Ko), not only knows Weichung but also drops vague but unmistakable allusions to another, forgotten side of the man. In short order, Weichung’s stability, seemingly the only rock amid everyone else’s personal and professional issues, is revealed to be the most precarious, a front for a man who’s been repressed for so long he’s even begun to fool himself. A chance meeting with Thomas (Wong Ka-lok), an attractive male flight attendant looking for glasses, creates further anxiety for Weichung, prompting him at last to confront his repression.

If this plotline suddenly halts what might otherwise have been a standard comedy of manners, Chen does not stop staging the movie as a rom-com. Mandy’s story only gets more ridiculous, as the erstwhile bridezilla suddenly experiences cold feet when she envisions a future spent roaming the aisles of supermarkets buying the same list of groceries and goods, a fear matched by uproarious shots of a department store so vast that a Walmart seems as big as a mom-and-pop store in comparison. Faced with the realities of marriage, she recoils, retreating to her apartment to watch soaps as she imagines the lothario from her favorite show staying with her and keeping thoughts of a perfect romance alive.

Meanwhile, Weichung’s more agonized impasse gets a twinkling touch here and there. The scene of Weichung helping Thomas pick out just the right frames plays out as a typical rom-com meet-cute, and a subsequent optical exam is lit in shimmering golds as if it were a dinner at a high-scale restaurant. And when Thomas later makes the first move, giving Weichung a loving peck on the cheek, Chen films Weichung’s bliss not with a double-dolly but a double-crane, with the momentarily unguarded gay man not merely floating along the ground but rising up and up until you think he might join his old boss somewhere in the sky.

Despite the grand stylistics, this is for the most part an actor’s showcase. Ren never overplays Weichung’s dilemma; he keeps him cautious even as he begins to live more “out”; a lifetime of hiding can be seen just in the weight he carries in his shoulders. One could argue that the film plays it coy when it comes to Weichung’s sexuality by leaving him so muted, but the actor’s hesitation rings true to how seriously Weichung weighs his own happiness against obligations to a family he does not wish to hurt. Ren’s own understatement balances out Hsia’s more stereotypical performance, as she sits among a steadily growing pile of food containers and mopes around her apartment.

But the film belongs to Fan, who generally remains as calm as Ren but visibly strains from the pressure of keeping up appearances both at home and at work. Limited to one understandable outburst, Feng otherwise tries to find some logical, balanced way forward, and Fan’s barely hidden winces of sadness betray the emotional calculus running in her head at all times. Neither Fan nor the script reduces Feng to a despairing or enraged victim. They instead work the character out as a person, which is a method indicative of the entire film’s warmth and consideration.