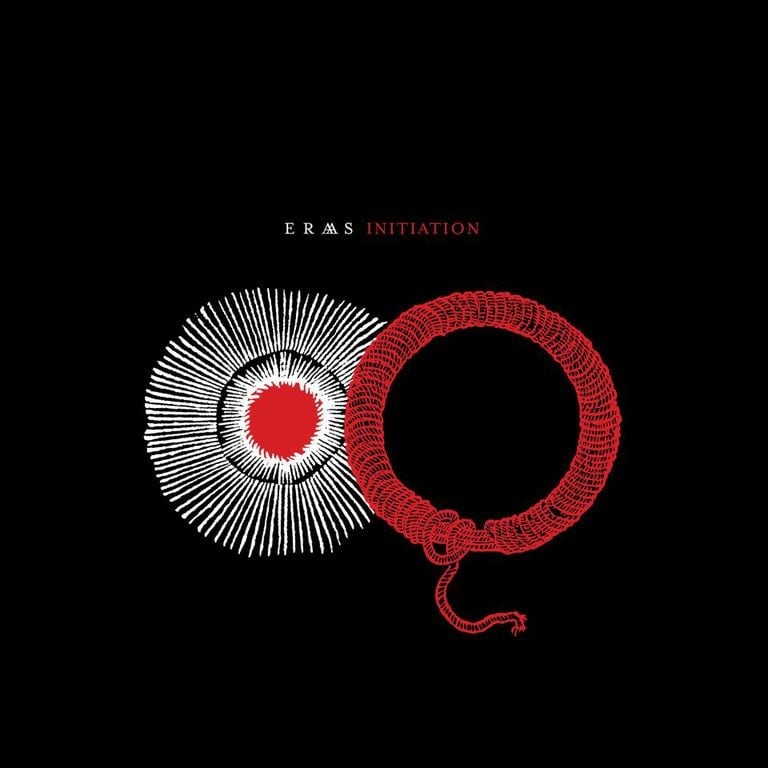 [xrr rating=3.0/5]Brooklyn duo ERAAS’s music focuses heavily on mood and atmosphere, and it’s often centered on a haunting sound that is at once tense, spacious and inky dark. While 2012’s debut frequently suggested Robert Toher and Austin Stawiarz’s background with experimental post-rock collective Apse—a muscular geometry prominently emerging from the black fog on many of that album’s songs—Initiation is considerably more abstract and synthetic throughout. With this sophomore effort, ERAAS is more distinctively presented as a project unique from the duo’s early work, one that incorporates fewer aggressive rhythms and post-rock structures in favor of the texture and pacing of eerie electronica.

That style often results in ERAAS achieving a sinister trance, either within a song or as the album is absorbed in its entirety, the band’s more avant-garde tendencies pushing Initiation in the direction of gloomy sonic experimentation. On a song like “Splitting,” where the track’s urgent stick-clicking step could have made for a more standard post-rock exercise, ERAAS instead channels late-era Radiohead with drowsy synths and mercurial vocals echoing around the stage. As on many of these songs, sonic debris fills in some of the cavernous space left between beat and begrudging bass lines, including unnerving spoken recordings and fuzzy white noise. Considering the eerie tones prevalent throughout Initiation and the duo’s particular taste in samples and electronic trickery, this is what it might sound like if Thom Yorke and Burial covered an early Sisters of Mercy demo, while really, really stoned.

Yet Initiation is even less song-based than that description might suggest. Many of these tracks purposely don’t go anywhere, an enveloping ambiance and metronome beat doing little to inspire; the vocal parts here are often so ethereal or lyrically abbreviated that they’re difficult to recall even a track later. Nevertheless, the album’s 8 songs often strike a precarious balance between experimental rock and stringently composed sound art, and with songs and transitions both condensed into a brief runtime of under 30 minutes, Initiation is most interesting at those junctures. “Above” is mixed with the ragged ear of a Dirty Beaches track, the startling groove and patternless vocal acting as a bridge into the standout “Guardian / Descent.” “Old Magic” and “Splitting” feature the album’s most readily engaging hooks, but the sound collage nestled between them (“Circling”) is what makes the similar styles of those two highlights work so well.

Even the tracks that do align more closely with those on ERAAS’s debut, including the brooding opener “Looking Glass / Pettibon,” are more deliberate in the use of swirling, hypnotic melodies. That first track rides a steady thump, but it’s a muffled pulse that yields to the clatter of what sounds like yard bells and echoing synths stretched into infinity. That’s all before a ghostly female voice starts to hover over the top of the track, the mechanical rhythm gives way to a thin interpretation of a jungle beat and static obscures the last vestiges of the song fading into the distance. Closer “Initiation” closely mirrors the album’s opening but is even more amorphous and fades out more abruptly. There isn’t much in the way of singles on Initiation, but ERAAS is successful at cultivating a thick aura of gray and frost. While it’s hard to remember the songs that actually create that cinematic affect, it’s far easier to remember the overall experience those songs share.