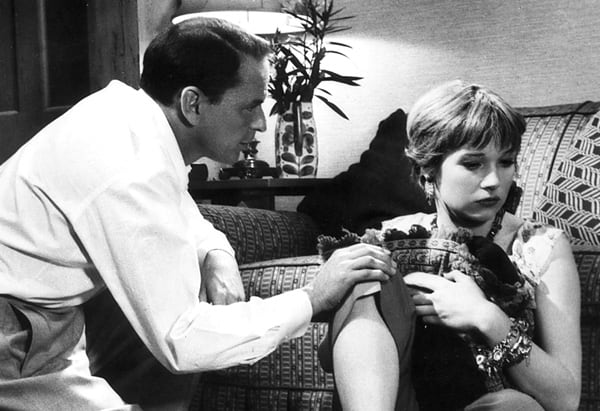 Today, Some Came Running is recognized by many as Vincente Minnelli’s most lavish melodrama, an emotional epic punctuated by a penultimate sequence famously conceived by the director to resemble the inside of a jukebox. Newlyweds Dave Hirsh (Frank Sinatra) and Ginny Moorehead (Shirley MacLaine) are stalked by her drunk, enraged ex-lover through the most phantasmagoric carnival this side of Cirque de Soleil, the area swarming with giddy townsfolk bathed in gaudily colored light. The ultrawide CinemaScope captures the expanse’s entirety, a hallucinatory and deliberately artificial space whose candied overtones belie both the sinister act at hand and the film’s overriding anguish. The scene’s chilling climax, filmed in gliding lateral tracking shots, gives the film its title before segueing magnificently into one of the truly moving and emotionally enigmatic final scenes in American cinema history, a sense of loss rendered in the most poetic of terms.

But not all Minnelli melodramas are created equal, which isn’t say they vary in quality, only that it’s inapt to hold any Minnelli film to any generic construct that would render it part and parcel with blanket sentiment or constrictive definition. Sure, Some Came Running is easily identified as the sort of studio melodrama Nick Ray and Douglas Sirk mastered post-WWII: garish, emotionally complex films about well-to-do Americans and their hidden neuroses. Yet other Minnelli films admissibly categorized as melodrama have (seemingly) nothing to do with American culture thanks to their European setting, those being Madame Bovary (1949), Lust for Life (1956) and Two Weeks in Another Town (1962). Others still (Home from the Hill, The Bad and the Beautiful) seem unrelated to what might be considered traditional “melodrama.” 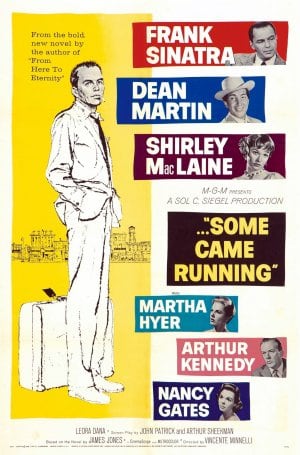 More than character, theme, and milieu, it’s something else that links Minnelli’s melodramas: the bubbling, almost metaphysical sense of saturnalia that exists among seemingly orthodox frameworks, what the critic Chris Fujiwara describes as a “mise en scène of excess.” By this notion, we can link the carnival scene with the ballroom scene in Madame Bovary or the re-creations of Van Gogh’s paintings in Lust for Life. In these scenes and others like them, it’s as if the contents of the frame are transformed—transformed by the very properties of light, sound and movement that previously produced images damn near soothing by comparison. Minnelli, of course, was a proud aesthete who exhibited in his work the very principles of film style, but he also reveled in the transformative nature of film art—in Some Came Running, any separation between the two is eradicated as soon as David Hirsh steps off that bus from Chicago.

Elemental inquisitions aside, the film features a number of thematic flourishes heightened by Minnelli’s use of visual language. Take, for instance, the scene where Dave is escorted through the regal French estate by the scintillatingly intellectual Gwen French (Martha Hyer); a slow pan of the camera steadily reveals the sloping green grounds when in the distance emerges an industrial factory of some sort, billowing gray smoke into a bright blue sky and completely diminishing the stately setting. It’s a brilliantly satirical sight gag rife with irony and cynicism for upper-crusty Americanism, an image worthy of (and maybe outright superior to) those found in Bunuel. It also signifies just how personal Some Came Running is to Minnelli, himself a product of the Midwest and no doubt sensitive to the copious mills and warehouses that litter the landscape, effectively eliminating any chance for natural beauty. The entire French estate scene, in general, almost feels like a film unto itself, the curious kitchen-cum-library and silhouetted guest house tryst providing a wondrously surrealistic flourish.

These scenes go a long way in illustrating the ways Some Came Running tends to hide things in plain sight. Like Dave, whose emotional arc takes him from despaired and disillusioned to despaired and suddenly, violently lucid, the audience is treated to a gradual (and occasionally breakneck) unscrambling of learned behaviors, moods and customs. The scene in which we’re first introduced to Dave’s brother Frank’s (Arthur Kennedy) secretary, whose innocuous (even forgettable) introduction to the story takes place on the peripheries of the frame despite the fact that her and her relationship with Frank become integral to the story, is an example of how Minnelli uses the CinemaScope space to establish a sense of isolation that the story strives to alleviate.

Still, a sense of finality evades Some Came Running, even as Dave’s emotional growth points to the tidy character arcs of traditional narrative filmmaking. The film ends tragically and seemingly without resolution, even though Minnelli, again using his frame as a storytelling tool, tips his hand early on. When Dave seduces Gwen at the French estate’s guest house, the composition of the actors suggested a resolution, as if the film could end that very moment. Again, the entire French estate sequence seems lifted from another dimension entirely. It doesn’t end there, of course, and Dave’s initial wooing of Gwen proves to be for naught. That’s why the final scene, in which Gwen throws Dave the most noncommittal of looks at a moment when hope is at its most elusive, pangs with a sadness that rings beyond the funeral procession at hand and reaches to the sort of emotional impossibilities that define Minnelli’s greatest works.