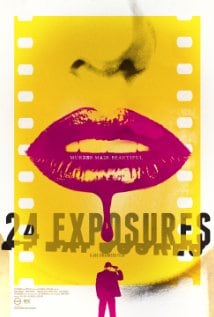 [xrr rating=1.5/5]There’s a lovely crane shot early in Joe Swanberg’s new film 24 Exposures: after lingering on what is apparently the bruised corpse of a young woman, the camera pulls back to reveal it’s only a photo shoot. A bird’s-eye view follows the staged scene in which Billy (Adam Wingard) has made up a nude model to look like the bruised victim of a lakeside crime. The graceful overhead angle that records this grisly image is the well-crafted work of a confident filmmaker. This leads me to believe, or hope, that the amateurish quality of the rest of the film— from unconvincing actors, to shaky handheld camera, to indifferent writing—can only be meant as satire. Whether the exploitation of 24 Exposures is earnest or subversive, it doesn’t work.

Billy is a fetish photographer whose girlfriend helpfully dabbles in lesbianism for a playful threesome, their bedroom exploits neatly dissolving into a frying pan sizzling with bacon. The elements of women and meat, and their cinematic juxtaposition, already puts Swanberg’s film squarely in the mode of any number of 1970s grindhouse cheapies, but he doesn’t stop there. After this ménage à trois, the photographer takes his Sapphic sweethearts to a café where he is soon infatuated with a young waitress’s most distinguishing feature. Billy stares admiringly at the facial bruise that she claims is the result of an accident with a cocktail shaker, but we learn that her shiner likely came at the hands of a jealous boyfriend.

Why do so many indie movies treat women like this? Noah Baumbach infantilizes Greta Gerwig in Frances Ha and it’s supposed to be delightful. Terrence Malick turns women into twirling morons and it’s supposed to be mystical and wondrous. Swanberg fills 24 Exposures with women who are either victims or killers, filling the roles of countless exploitation movies of decades past. But the depth of the misogyny is alarming for a mumblecore product. Aren’t indie movies and the hipsters who make and watch them supposed to be, you know, enlightened?

Gender politics aside, the movie doesn’t even work as the kind of exploitation flick it’s modeled after. The film isn’t satisfied with being mere exploitation. Movies about photographers, from the classic Blow Up to the recent indie bomb Crave, too easily fall into meditations on the nature of reality and fiction, and Swanberg introduces body and gender issues to this mix. A director like Abel Ferrara could inject provocative themes into an exploitation movie and still make it work as an exploitation movie, confounding politics and making visceral, thrilling, sexy entertainment. Swanberg fails on all counts.

Swanberg is a prolific indie director who made overtures toward mainstream success with last year’s Drinking Buddies. That film’s more accomplished actors and stronger production values didn’t make up for a lack of intensity. You’d think a quick descent into sex and violence would make for a raw, gritty film, but 24 exposures isn’t it.