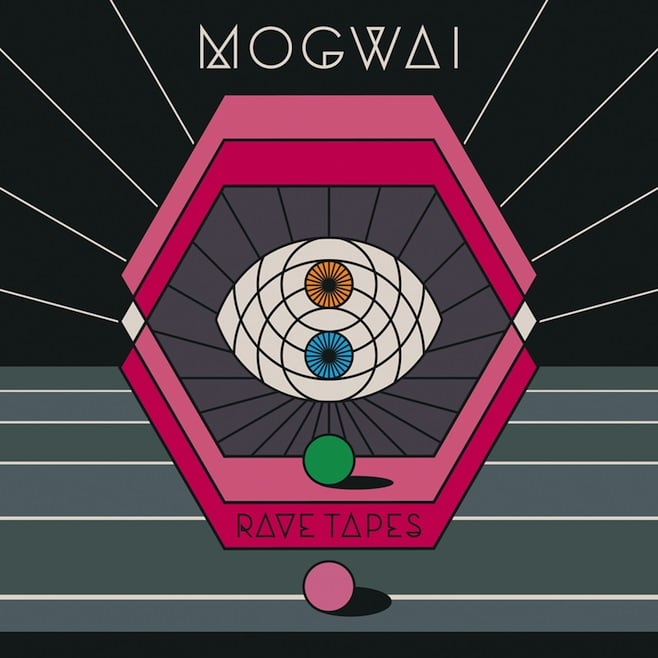 [xrr rating=3.0/5]“Train lines, going nowhere / No destination found” echoes Stuart Braithwaite across the raw piano strokes and elongated dissonance of “Blues Hour”. Using only seven words, Braithwaite explains the ideology behind the outfit’s dense post-rock discography. Like the steel that makes up America’s industrial rail lines, there has always been synchronicity and purpose behind the band’s intricate guitar arrangements. Yet, the interplay never pushes towards a climax, allowing the listener to bask in deep pools of self-reflection. Whilst the title, Rave Tapes, might hint at a more EDM-minded aesthetic, the 10-track LP doesn’t rely on the same build-drop formula of trending dancefloor bangers or even the established volume dynamics of Mogwai’s earlier efforts, instead building tension with the unknowing nature of existence itself.

Although known for their extended guitar stylings, the band has never let their tools limit the overall aural portrait. On album opener “Heard About You Last Night”, bells, subtle electronics and diminutive percussion rolls all act as tangential thoughts around the chordal nuisances. A long wale interrupting the serenity that Mogwai nearly allow to creep in across their instrumental melancholy. The percussion of Martin Bulloch takes the lead during “Deesh”, a triumphant march that battles the emotional insecurity that lines Mogwai’s standard fare. And a peculiar Tool-esque electronic soundscape dominates the onset of “Remurdered”. Much more broken than other tracks in the album, the five-piece don’t place as much emphasis on coalescence during the track, reflecting the more ambient metal works within their early catalog.

Reminiscent of 1997’s Young Team, “Repelish” is based off of an obscure vocal sampling and easy-going melodies. Utilizing a powerfully earnest reworked commentary on “Stairway To Heaven” (the original message was delivered on a Christian radio station in the US) the group remark on the absurdity of cultural criticism. 40-years ago, people were questioning the effect Led Zeppelin would have on youth culture, just as today’s media question the impact that raves, EDM, and molly might have on unsuspecting ‘teens. While the Mogwai sound has remained relatively unchanged for almost two decades, this is seemingly a message meant for all the up-and-coming artists to keep doing what makes them happy — even if it’s directly in the face of public scrutiny.

While their recent score for the French zombie television program “Les Revenants” was naturally set to a series of attention-grabbing imagery, the delicate arrangements of Rave Tapes are meant to exist on their own. Without much lyricism, juxtaposing themes or ear-piercing guitar screams it is frustratingly easy to lose contact with the instrumentals. Even with tracks that continually stretch in excess of five-minutes, songs just stream by as one gazes into the odd rhythms of everyday life. Embodying a hypnotic nature, the record can draw to a conclusion with little memory of the overall experience. Each subsequent listen helps to unravel veiled mysteries that exist within the music and one’s own thoughts. So, be prepared to dedicate some time with this piece.