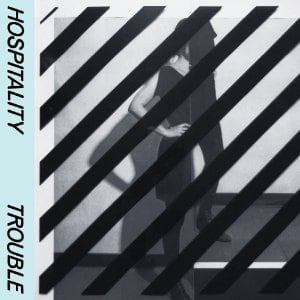 [xrr rating=4.0/5]Right about this time two years ago, I sat down to listen to the self-titled debut of a Brooklyn band named Hospitality. I was immediately struck by the quality of craftsmanship in its songs and equally struck by the thought “how am I going to write about this?” Hospitality’s music didn’t fall neatly into genres; it didn’t follow rules of pop music while still being more mannered than experimental, and it often felt as downbeat as it felt cheerful. Their sophomore album Trouble continues this same problem for me, but hey, it’s a pretty good problem to have when the songs are this good.

The most immediate change noticeable from the trio of Amber Papini, Nathan Michel and Brian Betancourt is the inclusion of synthesizers, which combined with an album cover apparently created by the living incarnation of the 1980s, would make you think this is a shinier release than Hospitality. But with the exception of “Last Words,” one of the best tracks on the album (more on that later), Trouble doesn’t sound too different from their first album. The refined approach to pop songwriting is still there, and if there’s no hook quite on par with the guitar crunch of “Friends of Friends,” the slinking lines of “Going Out” is pretty close. A trumpet takes a memorable lead turn in the gorgeous, shimmering “Sunship,” while “I Miss Your Bones” sounds like the most mannered power pop trio you could ever imagine. It’s actually quite amazing that Hospitality never sounds like they’re really experimenting; instead, the band sounds like they simply play the music they were meant to play without making a mission statement out of it.

On first listen, it’s tempting to say Trouble is gloomier, quieter album than Hospitality, but that’s not quite right. The band are masters of juxtaposition, and even the saddest songs on the album have an upbeat tinge; combined with Papini’s arch vocals, sometimes this pushes them right to the edge of twee, as on “It’s Not Serious.” But they don’t quite fall in the camp of parody (yet, anyway), in part because the trio feels so sincere. This is most apparent on the aforementioned “Last Words.” At six and a half minutes, it’s by far the longest and most atypical track on the album, opening with a deep bass pulse and washes of synthesizers before keyboards bring in the melody. There’s a motorik beat to it, but it’s not a Krautrock homage; at over four minutes in, there’s a guitar solo that feels like it might fall apart at any second. Eventually, highly treated voices counter Papini’s voice. The actual lyrics are hard to make out, but they don’t really need to be articulated to be meaningful; instead, they simply feel wistful, like silently watching a beautiful stranger walk away.

And that’s a big part of Hospitality’s sound. They don’t easily fit in genres that make them easy to write about, but they are very easy to feel along with. Trouble is both a natural extension of their first album, and a leap forward, even if it doesn’t sound like the most experimental album in the world. It doesn’t need to.