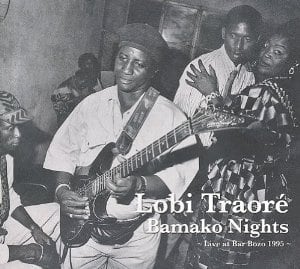 [xrr rating=4.5/5]Lobi Traoré was one of Mali’s many musical treasures. A scorching-hot guitar player nicknamed “Africa’a Jimi Hendrix,” Traoré helped redefine the electric guitar’s role in African music until his death at age 49 in 2010. Although never as famous in the west as, say, Salif Keita, Baaba Maal or Ali Farka Touré (who produced Lobi’s 1995 release Bamako), Lobi remains a well-known and much-loved figure to guitar aficionados the world over. This latest release, Bamako Nights, does nothing to besmirch that reputation and will in fact only enhance it.

This album, consisting of a previously unreleased live set from 1995, opens with a trifecta of outstanding tunes, each topping eight minutes. The first, “Ni Tugula Mogo Mi Ko,” utilizes Traoré’s nimble fretwork to create a laid-back, hypnotic guitar riff, over which his expressive vocals can tumble. Traoré has a voice which might be affectionately described as raw, but is nonetheless hugely expressive; it can strain at times in the upper registers, but the sincerity of his singing makes up for this, even if the listener isn’t fluent in the language.

Follow-up tune “Banani” is a quicker affair, utilizing a bouncing bass line and copious percussion to create a loping tempo that effortlessly carries listeners along. The second half of the song really takes off, though, with some flashy guitar pyrotechnics, hyperactive drumming and hints of reggae rhythms. It’s the third track, though, that is the standout: “Dunuya” is the best song of the three, the best song on the album and quite possibly the best song you’ll hear all year, even though the year has only just started). It is one of those time-defying, trance-inducing numbers that Traoré could pull off like no one else, an exercise in guitar wizardry that never seems self-indulgent. Glued together by a rock-solid rhythm section, Traoré’s guitar lines are free to wander: one molten riff builds on the next, one guitar effect bleeds into another and the whole thing just cascades into a sonic freakout-meltdown-mindfuck. Don’t feel bad if you didn’t know this sort of thing was happening in Bamako, Mali a few years ago. Not many of us did.

And hell, we’re only halfway through the album. If the back half doesn’t quite measure up to this opening—and it doesn’t—well, there’s no shame in that. The remaining four tunes are solid, and occasionally brilliant. The best of the bunch is probably the album closer “Bamake N’tichi,” with its eight-plus minutes of restless energy and fretboard fluency, but the other tracks are about as strong. There’s not a weak tune on display here, which is a good thing, as there are only seven songs in total.

Lobi’s fans should not hesitate for a moment: this is a strong document of a guitar maestro at the peak of his live-performance powers. Newcomers to African music, or to African guitar gods, are encouraged to jump in as well. Lobi is gone now and these Bamako Nights are that remains.