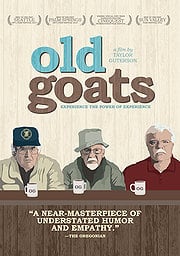 [xrr rating=2.0/5]A Winchester shotgun is introduced in the middle of Old Goats, writer-director Taylor Guterson’s meandering elderly bromance. As far as that prop goes, the movie follows the rule of Chekhov’s Gun, that any firearm introduced early in a story will inevitably be used later, by the book. Somebody does eventually fire the weapon, but to a decidedly undramatic end: a duck hunt. Chekhov’s dramatic principle aims to strip fiction of everything that doesn’t further the story, and he may well have approved of Guterson’s sparing use of that Winchester. How he’d feel about a joke wherein an elderly man falls into a hot tub is another matter.

Old Goats takes place in the somewhat isolated community of Bainbridge Island, near Seattle, and mainly concerns three of its residents. Bob (Bob Burkholder, who died in September at 90) is an ornery octogenarian veteran who’s always been lucky with the ladies and even in his autumn years has still gotta have it. And he’s also gotta write a book about it. Britt (Britton Crossley), a fisherman, has lived alone on a 70-square foot houseboat for the past thirty years, but hasn’t been with a woman in forty; he’s understandably awkward. David (David Vander Wal) is recently retired but reluctant to move to a Palm Springs condo with his shrewish wife Crystal (Gail Shackel). It’s David who sets what plot there is into motion when he becomes part of an after hours kaffeeklatsch at his local café, where he meets and befriends Bob and Britt.

The movie makes you think about fascinating questions. How will we spend the autumn years of our life? What kind of people will we be when we’re old? Will we be proud of the life we’ve lived? Or bitter and ornery at how we’ve wasted it? These are the things we think of when we see the elderly, from Alexander Payne’s drama Nebraska to ensemble comedies like The Best Exotic Marigold Hotel. A recent human interest newspaper story highlighted senior gumption perhaps better than any of these films. A group of elderly Koreans in Queens ran afoul of their local McDonald’s when they’d arrive early in the morning, pay a dollar for a cup of coffee and then stay all day. The restaurant’s response was to call 911.

There’s a great movie in that real life senior drama, as I’m sure there’s an entertaining and moving true story behind the fiction of Old Goats. The director met his cast while making short films around Bainbridge Island, and he thought the men could carry a movie. Old Goats doesn’t disprove him. You can see hints of the stories and local color that these men and other Bainbridge Island residents naturally convey. Too bad it’s shoehorned into a contrived, meandering elderly bromance. The amateur acting is distracting, the conversations and mild raunch comedy come off like senior mumblecore. Crossley is the most affecting actor – his awkwardness is endearing and his distant gaze is a quiet expression of loss and regret at a life not fully lived. Naturally it’s Britt who, in a bit of slapstick uncharacteristic of the rest of the movie, falls into the hot tub. It’s a condescending fiction that doesn’t show these unvarnished actors the respect they deserve.