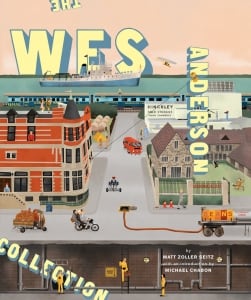 [xrr rating=3.5/5]Few filmmakers can claim the immediate support that greeted Wes Anderson’s debut. The idiosyncratic director is one of the most popular and influential filmmakers of his generation, but despite his high profile, no book had yet tackled the analysis of his body of work from Bottle Rocket to Moonrise Kingdom. Cue Matt Zoller Seitz’s The Wes Anderson Collection, a “coffee table book” celebrating Anderson’s films in reviews, interviews with the director and seemingly endless images that channel the quirky director’s meticulous style. The book is immediately appealing due to the amount of photos and artwork, but the text is not as satisfying as one would hope. Therein lies the frustration with The Wes Anderson Collection: it’s difficult to know whether to treat the collection as a stunning coffee table book or as an insightful examination of Anderson’s techniques and influences.

Zoller Seitz is an award-winning critic whose first meeting with Anderson dates back to 1993 and the premier of the short film version of Bottle Rocket. His knowledge of and appreciation for Anderson’s work may be second to none, and here, he presents a comprehensive view of Anderson very much from the point of view of a longtime fan. Zoller Seitz’s reviews, which precede his interviews with the director, are all very personal, drawing emotional parallels between The Royal Tenenbaums and his own experiences with divorce. What these essays bring to the collection is Zoller Seitz’s intense affection for Anderson’s films, his enthusiasm certainly acting more as a charm than an annoyance. But the downside is that Zoller Seitz seldom discusses these films with a critical eye. During his interviews, the author frequently presents Anderson with his own theories on the films’ recurring themes for judgment, rather than Anderson illuminating any of his actual intentions.

The collection itself is divided into multiple sections, one for each of Anderson’s seven films. Zoller Seitz introduces each movie with 1,000+ word reviews (with word counts included in homage to Anderson’s predilection to cataloguing) before leading into his lengthy interviews. Accompanying each section are full-page film stills, costume designs, excerpts from scripts, behind-the-scenes photos and storyboards—400 photographs in total. Of particular visual appeal are the illustrations by Max Dalton—double-page spreads of each film’s main location—whose whimsical style and color palette both emulate and interpret Anderson’s. Other highlights are the shot-for-shot comparisons between these films and their direct influences. In particular, the discussion of François Truffaut as a major influence and frequent subject of homage is a highlight.

Where the collection falters is in Zoller Seitz’s reviews and book-length conversation with the director. The Wes Anderson Collection tries to present itself like the hugely informative volumes that have come before it—Truffaut’s exhaustive interviews with Alfred Hitchcock, Richard Schickel’s Conversations with Scorsese, etc.—but at times falls short of achieving their insight. The lengthy conversation between Zoller Seitz and Anderson mostly deals with the basics of Anderson’s direction and the occasional production anecdote. Given the space provided by such an enormous book for their conversation to unfold, it is a shame that their discussion doesn’t extend beyond a superficial back-and-forth. The director’s inherent reticence and his tendency to give Zoller Seitz’s questions short, unhelpful replies can be somewhat frustrating for those who would love to see him speak freely about his process and the development of his scripts.

As a book-length interview and semi-critical view of Anderson, The Wes Anderson Collection lingers too much on the basics. However, the collection provides invaluable insight into Anderson’s filmmaking in its generous collection of previously unpublished photographs and storyboards, which is perhaps all that the author intended. Despite its shortcomings, the book will undoubtedly be appreciated as a compendium of Anderson ephemera, and justifiably so.