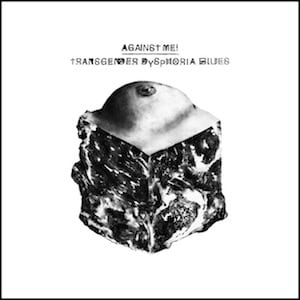 [xrr rating=3.5/5]A black and white medical illustration of a cross-section of a female breast: the album art is provocative, but for Against Me!’s Laura Jane Grace, this image is emblematic of a very real change. In 2012, Tom Gabel made public his decision to transition from male to female. Now (and she might say “always”) Laura Jane Grace, new Against Me! album Transgender Dysphoria Blues – originally positioned as a concept album about a transsexual prostitute – shifted away from this fictional conceit into more autobiographical territory. While the proportion of how much of the album’s material is related to raw experience is unknown to us, it’s safe to say the songs archive some of Grace’s experience as a person in the throes of reconciling gender identity. If alienation is grist for punk rock’s mill, this record promises to be nothing short of intense.

For those coming to this album unaware of Grace’s transition, the track placement shakes listeners awake to the trauma and fits of struggle at the core of this collection. After the accelerations of a rolling snare, the first words Grace sings are, “Your tells are so obvious/ Shoulders too broad for a girl.” It’s exactly this kind of sentiment that makes this work so bracing, the bravery of showing your true self only to be censored, shamed and denigrated by the critical eye, whether one’s own or those of an onlooker. “You want them to notice/ The ragged ends of your summer dress/ You want them to see you/ Like they see every other girl/ They just see a faggot/ They’ll hold their breath not to catch the sick” – the chorus articulates so well the pain and rage and longing and grief. And yet the music behind the track isn’t a downer at all, the riffs chugging along at a speed-punk pace. The accessibility of the music allows for an intersection with the audience, delivering lyrical content that may be well outside most listeners’ direct experience, particularly in a genre that is rightly or wrongly associated with testosterone and machismo. The same is true for the following track, “True Trans Soul Rebel,” the title alone emphasizing again in quite literal terms the fact that this album is not shy about presenting as a personal statement.

Some of the tracks do diverge from the subject of gender, though they hold no less gravity. Strummed ballad “Two Coffins” deals with another kind of crossing over. The song is about the mortal fate of two lovers, and the idea that the corporeal body is but a vessel is very likely a notion that Grace supports. “Osama Bin Laden as the Crucified Christ” is the outlier of this particular group, despite the fact that Against Me! is no stranger to political commentary over their discography. On Transgender Dysphoria Blues, however, its inclusion seems to be a placeholder, reminding fans of their broader purpose.

How Against Me! soldiers forward from here is anyone’s guess. Only Grace and guitarist James Bowman remain from the original roster, and Grace’s transformation certainly impacts the dynamic and direction of the band. While her vocals remain unaffected – they are as punched and direct as on previous records – it’s fair to say that much has changed. What a strange position Laura Jane Grace is in, and what a unique experience it is to see her development translated through punk rock. Perhaps more folks will be inspired to stop gawking at the transgendered and start listening to them instead.