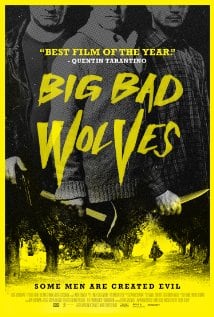 [xrr rating=2.75/5]Last summer, Pedro Almodóvar made minor waves with a scene from I’m So Excited where a woman, hopped up on an aphrodisiac, relieves herself of her virginity by raping a drugged man. Multiple critics took to the interwebs claiming that rape of any type should never, ever be played for laughs. Big Bad Wolves, a nasty little import from Israel, raises a similar question about torture.

A child killer is on the loose in this effort, directed by Aharon Keshales and Navot Papushado. We first meet protagonist policeman Miki (Lior Ashkenazi) as he and two thugs rough up a bound suspect with a telephone book. But this is the digital age and someone catches the beating with a phone and it isn’t long before the footage makes its way to YouTube and Miki is suspended. Taking matters into his own hands, Miki pursues the suspect, the meek high school teacher Dror (Rotem Keinan). But Miki’s plans are fruitless when both he and Dror are apprehended by Gidi (Tzahi Grad), the crazed father of one of the murdered girls who has set up an impromptu torture chamber in the basement of a secluded house.

With Dror bound and Miki a chained-up bystander, Gidi goes to work on the teacher, using intimidation and pain to draw a confession. But Big Bad Wolves raises the obvious question: won’t any man tell his torturer what they want to hear after enough agony? Keshales and Papushado aren’t shy when it comes to Gidi’s brutality, and in this viciousness, Big Bad Wolves, is cringingly effective. However, this is not Zero Dark Thirty and the directors haven’t crafted a straight torture porn flick a la Hostel. The directors never pander when it comes to the moral choices made by Miki and Gidi, but they don’t really give us time to pause to contemplate the morality or efficacy of such methods. One is blinded by grief and the other by vengeance and, like them, we are alternatively convinced and skeptical of Dror’s guilt. Throw in some well-placed plot twists and you have an interesting little film that could gain a cult following. At its best, Big Bad Wolves is a taut thriller tempered with nervous laughs and moments of unease, but that’s where it stops.

Unfortunately, ambition, ambiguity and scale prevent Big Bad Wolves from complete success. Everything is overdone as the directors play each moment as “the big one” with melodramatic camera sweeps and uncomfortable close-ups. We also have no idea why Dror is a suspect to begin with. That missing piece of evidence, the one that has Gidi and Miki convinced that Dror is a monster in sheep’s clothing, really would have enriched the viewing experience. Without it, we remain in the dark until the film’s final moments and by then, the final reveal feels tacked-on rather than the shocking truth for which directors are obviously working to achieve.