October 19, 2020
Home Music Lanterns on the Lake: Until the Colours Run 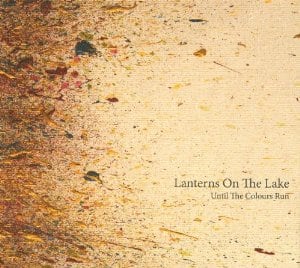 [xrr rating=3.25/5]Newcastle ensemble Lanterns on the Lake released a well-received debut of quiet, electronic folk and post-rock in 2011, but things have been difficult for the band since, financial and personal struggles leading up to the departure of two founding members in 2012. Lanterns on the Lake replaced their lost bassist, but the last few years are still evident in this new music, and immediately obvious as Hazel Wilde took over vocal duties for the songs on Until the Colours Run. This sophomore album also makes some pretty significant changes to the band’s overall approach, doing away with the more brittle electronic elements and favoring songs that abandon the seaside folk leanings of Gracious Tide, Take Me Home. In fact, many of these tracks surge forward and grow towards grand, boisterous conclusions (Explosions in the Sky immediately comes to mind as opener “Elodie” starts to expand), this dramatic urgency seeming to be a direct reaction to the doubt and turmoil the band faced as it made this record.

Nevertheless, Until the Colours Run reflects the weariness of a band poised to dissolve as much as it does resilience in the face of decay. Wilde approaches her lyrics with an allegorical pen, but often touches on topics that are tense, frustrating or heartbreaking: the economic adversity and contentious politics in Northern England, the memory of a relationship long in the rearview mirror, the drunk and listless dreaming of their future. On “The Ghost That Sleeps in Me” Wilde asks, “Are we a dying breed/ the last of the real thing?” “Another Tale From Another English Town” is more direct, Wilde invoking political resentment as she sings, “It’s getting hard to breathe round here/ To think round here/ We’ve been sold a thousand lies this year…they won’t stop until they see us in the ground.”

Even the stiller, more delicate ballads are structured by a newfound sense of velocity and progress meaningfully in a way earlier Lanterns on the Lake songs didn’t attempt. That energy doesn’t distract from the combination of anger and fatigue that bruise much of Until the Colours Run. If anything, rushes of distortion, strings, brass and the occasional guitar solo are intentional counterparts to such purveying – and sometimes overwhelming – emotions. The album’s lush production can be a bit overdone, prioritizing the kind of swelling orchestration that obscures as much as it does bolster smart melodies. Fortunately, Wilde’s exposed performances on “The Ghost That Sleeps in Me” and the striking “Green & Gold” are as commanding as those on propulsive openers “Elodie” and “The Buffalo Days.” For the most part, Until the Colours Run finds a young band overcoming adversity and being better for it – it’s an album that acknowledges fresh scars, but doesn’t dwell on them too heavily.