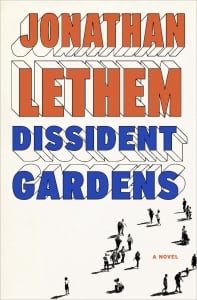 [xrr rating=2.5/5]Jonathan Lethem can move to other parts of the country, write about rock bands or evangelize Bob Dylan, but no matter what he tries or where he tries it from, New York City is his blood. Though his best novels have taken place there (Motherless Brooklyn, Fortress of Solitude), Lethem’s expertise isn’t necessarily one of setting or verbalizing a postcard, it’s one of attitude. His ability to translate the idiosyncrasies of the New York spirit is unmatched, creating characters shaped by its streets, its smells, its politics and most importantly, by one another. And with his ninth novel, Dissident Gardens, he threads a quirky version of New York confidence across several decades, multiple boroughs and a handful of characters each flawed by their own beliefs.

Dissident Gardens doesn’t focus on a single character, instead centering on a theme, the American left, and how it permeates and divides a New York family across three generations. The matriarch here is Rose Zimmer, a Polish Jew who also happens to be a card-carrying Communist until she’s booted out of the party in 1955 for having an affair with a black cop. If there’s a central player, Rose is it, as we’re with her from the beginning of World War II when her husband is sent to East Germany as a spy through her modern-day dementia-infused death. Rose comes in and out with brash opinions, bullying those around her under the guise of activist and organizer, even taking aim at Archie Bunker and wreaking havoc on her nurses in her final days.

Rose’s daughter, Miriam, carries different ideals into the next generation but pursues them with equally unwavering staunchness. A hippie, she falls into the Greenwich Village beat scene and marries a folk singer before venturing to Nicaragua on a “poet’s revolution” in support of the Sandinista. While there, they both end up succumbing to a mercenary, orphaning their son Sergius to be raised by Quakers at Miriam’s request to avoid him being adopted by Rose. Sergius bookends the family trilogy of revolutionary pursuit, ultimately ending the novel detained as a threat in a Maine airport after being caught having sex in a bathroom with a girl he met at an Occupy event.

Surrounding all these characters are a subway car’s worth of relatives and scheming outliers with their own agenda involving the family. There’s Lenny, an exploitative cousin in pursuit not only of Miriam but partnering with Bill Shea to bring the Mets to town. He eventually ends up getting himself killed by the IRA. Then, there’s Cicero Lookins, the son of the cop whose affair with Rose ended her Communist dreams; he’s raised by Rose and considered a step-brother to Miriam. Overweight and ashamed of his sexuality, Cicero frequents the docks in search of anonymous exploits and becomes disenchanted by students walking out of his lectures at the Maine college where he’s a professor.

Get all that? Yes, exactly. Lethem has never written better, but he’s also never been less focused. Stretched across four sections that jump between characters and eras, there’s simply too much going on over too long of a time span. It’s as if these characters were created for separate short stories, but were forced together through the guise of blood and hard-headedness, and there’s not enough pages for all of them. He nails the generational consciousness like a “Mad Men” script, especially the stubborn, doomed assuredness each has in their beliefs, and how the waterfall effect of those positions shapes those who follow. Everyone’s in pursuit of something they never find, but with New York heart they never stop trying.

Dissident Gardens does not fail with its characters. With the exception of Lionel Essrog, Lethem has never created players with such depth and richness as Rose and Miriam. They are products of their environment, with Lethem serving his finest role not just as City anthropologist, but also cultural. If nothing, Lethem’s ambition is the obstacle here, as that aspiration borders on overwhelming. Themes of McCarthyism, AIDS, civil rights, the 99 percent all fill books on their own, and lumping them together deprives us of crazy old Rose and free-or-die Miriam. These are characters with outsized presence worthy of their own stories, but sometimes it gets a little too crowded in the Big City. And when that happens, it’s easy to get lost.