While Vincente Minnelli’s previous film showed a more nuanced style from the director of The Band Wagon and Gigi, Home from the Hill pulls even further back, making a film nowhere near as florid nor visually dense as the director’s musicals and melodramas. Muted color palettes and unfussy production design are compounded by the practical limitations of shooting in ‘Scope while keeping an eye toward future play on Academy-ratio televisions, with centered compositions that often leave swaths of empty space in two-thirds of the frame. At first glance, Minnelli enters the ‘60s with this film far more humbly than he did the ‘50s.

Minnelli’s reserved direction is not, however, thoughtless direction, and Home from the Hill’s drab interiors expressionistically reflect its characters’ emotional states. It just so happens that the Hunnicutts, the family at the core of the film, have been bleached of the passion that typically overflows in Minnelli’s work. Here, the wide ‘Scope framing above all emphasizes absence, uncluttered frames indicative of the specter of lost love hanging over a household (at least until later revelations suggest that affection was never there at all). Even the all-red living room is chilled by death, its walls dotted with the hunting trophies of the family’s philandering patriarch, Captain Wade (Robert Mitchum).

The beginning of the film even anticipates its first burst of conflict through the laterally stretched image. Home from the Hill starts with Wade and his hunting buddies crouched in the reeds preparing to shoot birds, a vertically oriented activity that clashes with the aspect ratio. The shots generate anticipation for something happening along the frame’s natural x-axis, an anxiety confirmed when Wade’s right-hand man, Rafe (George Peppard), looks off-screen and suddenly dives for his boss as a shot rings out that does not come from one of the visible men but the vengeful husband of a woman with whom Wade slept. The entire setup takes barely more than a minute of post-credits time, yet its concision makes the sequence surprisingly harrowing. Similarly, Minnelli wrings great tension out of a later boar hunt, with the camera sprinting along tracks to follow hunting dogs racing after their target (with some gruesome inserts of the boar fighting back), as well as less active shots that mine the frosty relationship between Wade and his shamed wife Hannah (Eleanor Parker) for the dripping hatred of its lack of physicality. 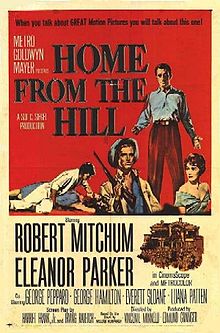 Enticing as Minnelli’s direction still is, however, this is one of his rare films that is entrancing as much for its script and actors as its maker’s touch. Adapted from Texan author William Humphrey’s novel, Home from the Hill has more of the flavor of a Deep South work, the roiling sexual tension of Tennessee Williams matched with the corrosive, destabilizing guilt of Faulkner. (Incidentally, the film was shot in Oxford, Mississippi.) Wade, a local magnate who holds the deed to practically every square foot of Clarksville, Texas, has taken a kind of droit du seigneur of the local women, a transparent secret maintained by the entire town, which implodes when someone speaks the truth aloud. Mitchum plays Wade with unrepentant callousness; as a doctor patches up Wade’s shoulder from where the cuckold shot him, Wade arrogantly says, “I take it as my right to cross any man’s fences when I’m hunting,” and both he and the doctor know he’s not talking about shooting quail. He even takes the same tone with Hannah, blaming her for his wandering eye in blunt speech about her needing to “open her door” for him when she confronts him on his innumerable affairs.

For her part, Hannah has retreated into a fortress within herself, her punitive chastity its obvious physical manifestation and her aggressively protective relationship with her son Theron (George Hamilton), who appears to be the only person in Clarksville that does not know of his father’s true nature. Indeed, stifling under his mother’s sheltering as he approaches manhood, Theron turns to Wade to help him get in touch with his masculine side. Where Mitchum and Parker play their parts with the ruthlessness of stalemated foes, Hamilton is lost in willful innocence, his face betraying the extreme subconscious effort it takes for Theron to filter out the naked loathing in his parents’ interactions. But his coming-of-age—learning to hunt, asking a girl (Luana Patten) to go steady, gaining a friend in Rafe—is tainted by his father’s legacy, at first in the mild revenge Wade’s subordinates take in messing with his son, then in fury of a daughter’s father afraid the apple did not fall from the tree. But most upsetting of all is the discovery of Rafe’s full connection to the Hunnicutts, a revelation that shatters Theron’s illusions of his family and sends the film’s final hour into a spiral.

Minnelli’s principal talents were, naturally, theatrical, but Home from the Hill, as with Some Came Running, shows the director equally comfortable in a literary mode. Each twist and turn of Humphrey’s story manages to be more abhorrent and chilling than the last, and the spaciousness of the frame allows new wrinkles to creep in from the edges to slowly dawn on people. At times the devices can be just a bit too convenient, such as Wade and Hannah’s long war of emotional attrition coming to an armistice just in time for it to be rendered moot by the violent intrusion of a third party, yet the film is one of Minnelli’s finest, a drama that fits within the basic structures of the preceding decade’s pictures but bristles with a barely contained edge that anticipates the slackening of constrictions in ‘60s cinema and beyond. Ostensibly stodgier than the director’s most well-known work, Home from the Hill only reinforces how modern Minnelli was.