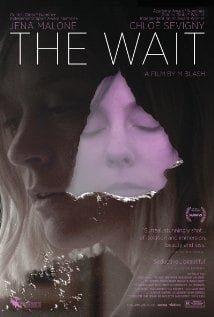 [xrr rating=1.5/5]The first half-hour or so of The Wait lays out a compelling exercise in loneliness and despair. Sisters Emma (Chloë Sevigny) and Angela (Jena Malone) stand at the deathbed of their just-departed mother, with M. Blash’s disquietingly still, de-centered composition communicating the fractured emotional health under a calm veneer. The phone suddenly rings. Emma dries her soft tears and answers. The voice on the other end offers that usual, useless condolence of “Everything happens for a reason,” but then goes on to say that the dead woman will come back to life, triggering superstition in Emma that ripples out among her already stressed family and sends both her sister and her children into their own fragmented coping mechanisms.

It’s a simple setup but, for a time, it is all that is needed. Sevigny and Malone etch characters into the granite slab of the somber atmosphere. Speaking to the other, each speaks just enough to allude to a relationship that is trusting but wary, two people bound only by genetic code and otherwise alien to each other. The actresses play to their respective strengths: Sevigny as the inscrutable, reserved performer, Malone as the more forthright, take-charge sibling, capable of dredging up such abashed outrage at Emma’s insistence on leaving the body in place for a resurrection that Sevigny’s quiet resolve is revealed through Emma’s ability to firmly withstand Angela’s anger. The actresses subtly flip expectations, with the spikier Malone representing the logical response to grief while Sevigny’s soft, calm voice belies a total surrender to emotions. Were the film solely about the pair slowly engaging in a muted battle between reason and grief, The Wait might have been a long-overdue showcase for both performers.

Instead, The Wait quickly loses its focus, dissipating its tension among an ensemble cast in isolation, with characters all closely related but rarely occupying the same frame. Thus forced to constantly cut between them, the film simply repeats its brief visual and spoken synopses of its characters to no end. Ergo, Emma’s son Ian (Devon Gearhart) spends all of his time on-screen listlessly puttering around, hanging out with a friend’s dad (Josh Hamilton) showing him morbid Internet videos, ogling a girl he has a crush on from afar. Meanwhile, Angela connects with a history student, Ben (Luke Grimes), whose discrepancy between intended and actual age approaches classic “90210” levels of disconnect. Making matters worse is his mysterious loner act, which at its best (its best!) takes a page from Wes Bentley’s bag-worshipper from American Beauty and at its worst, as when he asks Angela for something precious to Emma’s child daughter Karen (Lana Green), suggests that he will make a sex offender registry before the Dean’s List. And speaking of poor Karen, to see this child is to see a warp in the space-screenplay continuum, a person who exist solely to move forward a plot that never coalesces, and to clarify emotions that have not modulated for a solid hour. In a film that never gives any of its characters anything to do, Karen stands out as especially useless.

Blash’s initially intriguing direction also becomes laboriously monotonous. Hints that his seemingly assured formal command is a front for self-conscious, emptily “arty” composition come early on, most notably in a shot of Ian looking out at a budding wildfire on the horizon as a firefighting plane dumps red suppressant like a razor nick in the sky, a shot that begs so shamelessly to be taken as serious, great art it’s hard not to laugh. From there, the film remains resolutely stuck in the same gear, so caught up in the notion that the wait promised by the title is worth investing in solely for its denied catharsis, with no regard for filling that wait with meaningful personal or philosophical rumination or growth. Even Blash must have realized how dull the film had become, including near the end a surprise symphony of sorts by way of one of those old “spot the difference” websites that pranks viewers with the sudden appearance of a gruesome face and a bloodcurdling shriek. For anyone who has used the Internet in the last decade, the second a page of two identical images loads is a dead giveaway for what will come, and in a movie that routinely preens its highbrow pretensions, it is this base condescension to the audience that proves the final straw. Lucky for Blash he put it five minutes before the end of the film; Lord knows how many might have walked out if it came earlier.