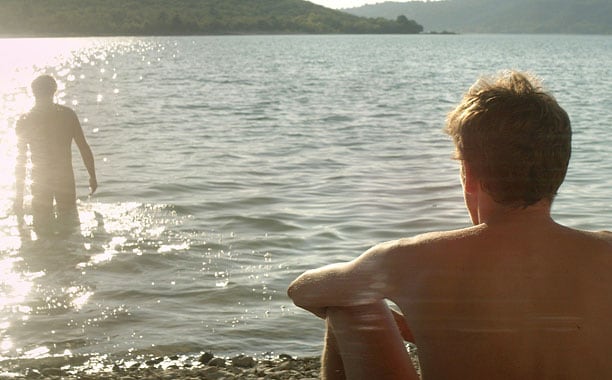 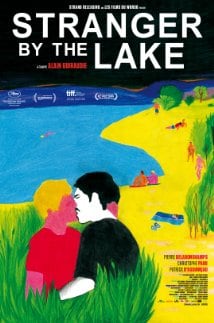 When I lived in Vermont, there was a trail that led to three swimming holes. At the first hole, the one with the large rock people could climb and then leap from into the water, families and teenagers often luxuriated in the summer time, building stone cairns on the bank and fires at night. Walk down a little ways and you would find one or two naked men relaxing at the second and least frequented hole. Once, I had gay friends visiting who heard rumors that the final hole was a popular cruise spot, so we decided to take the long walk down to the end. I went out of morbid curiosity. When we reached the final section of the trail, I saw about 40 naked men swimming, sunning themselves, or pairing off and vanishing into the woods. There was no OKCupid or Match.com or even fuck buddy finder app at work here. Just pure, visceral attraction and the excitement of the cruise.

Alain Guiraudie’s new film, Stranger by the Lake, takes place in a similar milieu, a quiet lake in rural France where men go to swim, sunbathe and fuck one another. We meet Franck (Pierre Deladonchamps), a constant cruiser who visits the swimming spot on what appears to be a daily basis. Thin, attractive and in his early 30s, Franck seems to know all the regulars, but he’s intrigued by a newcomer with a tight body who sports a Tom Selleck mustache to add just a touch of mystique. Franck is not only allured by the possibility of hot sex, but the serenity of the lake also helps him escape the clutches of the city.

But even in a laissez-faire setting like the lake, the vices of the city come to play, which includes cliques, ownership and jealously. Men become possessive over the hottest commodity and Franck soon begins spending time with Henri (Patrick D’Assumçao), an overweight, supposedly straight guy who the rest of the slender, attractive community ignores. As the pair talk about life and love, Franck has his eye on Michel (Christophe Paou), that sexy newcomer with the moustache. Unfortunately, Michel has already been claimed by another and Franck can’t get anywhere near him.

The film has garnered comparisons to Hitchcock, which are absolute hooey. Hitchcock films are tightly-plotted confections that leave very little shadow of a doubt. Stranger by the Lake is all about setting. The entire film takes place at the lake. The lake is the main character. Instead, Guiraudie has crafted a moody, poetic piece about the nature of desire unfolding in a hidden place in plain view.