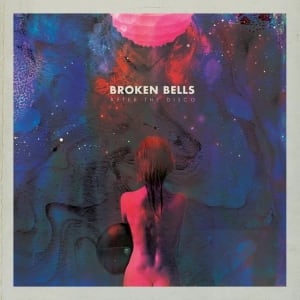 [xrr rating=3.25/5]With their powers combined, James Mercer (the Shins) and Brian Burton (better known as Danger Mouse) have forged a tandem that, like most superhero flicks, demanded a sequel. With their 2010 self-titled release, Broken Bells split the difference between Mercer’s indie darling leanings and Burton’s eclectic production prowess to craft a record that pleased hipsters and critics alike, even if it didn’t exactly blow anybody away. While Mercer calls the shots in his day-job band and Burton is seemingly able to pick up whatever high-profile production gigs he wants, Broken Bells acts as a true collaboration, the duo complementing each other to produce something new rather than simply mashing up their own individual strengths and letting it fly. The result in 2010 was intensely pleasurable, but lacked that extra kick of flavor to make Broken Bells linger after you’d swallowed their hooks. Following 2011’s head-bobbing EP Meyrin Fields, After the Disco serves as a valiant effort to remedy this, and it manages to move this passion project forward without exactly involving any feats of daring bravado.

Once again, this is a conservatively executed record, one that’s tight and polished. But as you can probably deduce from the album’s title, the dynamic duo whittle this sophomore LP down into a more specific niche, channeling the late ‘70s and early ‘80s in a more focused way than they did with their catchall ‘60s nostalgia on Broken Bells. The result is an auspicious kickstart to the album that loses momentum as it goes along.

“Perfect World” charges out of the gates as though the band is defying the frequent description of Broken Bells’ sound as “melancholic.” A Kraftwerkian motorik beat glistens and chugs along, Danger Mouse’s brawny but honed basslines driving the action while Mercer wails through the song’s chorus. The title track unleashes a full-bodied bass bounce that actually outshines the propulsive thump of Broken Bells’ “The Ghost Inside,” though the song ends up slightly less catchy, even as Mercer warms his pipes in the chorus for a falsetto that will become all the more prominent one track later. On first single “Holding On for Life,” Mercer gives Jimmy Fallon’s famous Barry Gibb impression a run for its money. It’s far and away the catchiest track on an album with no shortage of hooks, but it also completes a trio of songs that open the album on a high that can’t be matched throughout its remainder.

Incidentally, the “Holding On for Life” music video carries on the cinematic space opera aesthetic from the vid for previously mentioned “The Ghost Inside” (you remember: imperiled spacewoman Christina Hendricks detaching appendages one by one).

From there, the downshift is an abrupt one. “Leave It Alone” is one of After the Disco’s dud tracks, Mercer’s vocals almost sounding like a weak Bad Company song in some of the verses before a choral arrangement joins in repeating the titular phrase in what comes off as a overly robust lament. Later, “Lazy Wonderland” adds a music box melody to sullen singing by Mercer, a blend of whimsical and wistful that’s similar to much of the slower moments on Broken Bells. Meanwhile, “The Angel and the Fool” is another plodding, nearly throwaway track stuffed at the tail end of the album, a portion of the record that’s really only salvaged from mediocrity by a dose of shifty bass bounce in the infectious “Medicine.”

After the Disco is a welcome follow-up for a side-project collaboration that’s clearly intent on making this moonlighting effort work. There’s more energy here than on their debut (especially in the album’s first three tracks), and Mercer and Burton inch into new territory but also keep their safety harnesses pulled snug. If there’s a third album, it’ll be interesting to see if the duo can put together a definitive Broken Bells record, one that’s looser, more freewheeling, and hopefully less hit and miss.