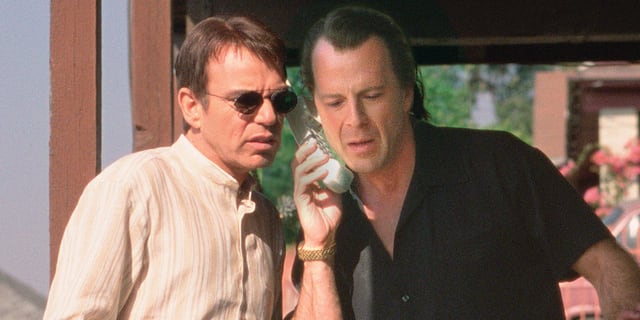 Cate Blanchett is currently receiving endless accolades for her performance as wounded trophy wife Jasmine French in Woody Allen’s Blue Jasmine, but the role is not entirely new territory for her. On paper Blue Jasmine has a lot in common with one of her previous – and largely forgotten – films: Bandits. Bear with me here. Bandits sees Blanchett portray an underappreciated housewife who takes out her frustration by singing epic renditions of Bonnie Tyler hits. She leaves her upper class lifestyle behind to experience something richer in life and predictably tries to find excitement in the arms of two bank robbers. All this under the direction of Barry Levinson, whose relentless output throughout the ‘80s and ‘90s put him toe-to-toe with Woody Allen as one of the most prolific American directors. Whether it was because of poor timing or simple misunderstanding, Bandits was dismissed as a hastily put together heist comedy that marked the beginning of the end for Levinson’s directing career.

Name-recognition is not something most directors can expect to achieve. Directors like Allen, Steven Spielberg, Martin Scorsese and Wes Anderson are all exceptions to that rule. Barry Levinson’s filmography reads like a list of modern American classics: Diner, The Natural, Good Morning Vietnam, Rain Man and Bugsy. And yet most people would be at a loss to name him, let alone know that each of these films has the same director. Part of that is due to the diversity of genres in Levinson’s oeuvre – and here Levinson finds a compelling blend of romance, action and comedy. 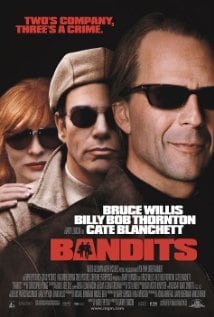 With a screenplay by Harley Peyton, who notably worked as a writer and producer on “Twin Peaks,” Bandits begins fairly routinely with convicts Joe Blake (Bruce Willis) and Terry Collins (Billy Bob Thornton) escaping the Oregon State Penitentiary and robbing a local bank on a whim. Realizing that this line of work could sustain them for years, they plot out the framework for the perfect bank robbery: target the bank’s manager the night before a planned robbery, spend the night with the manager and his/her family and then accompany the manager to the bank in the morning to empty the vaults. The strategy earns them the moniker the “Sleepover Bandits,” a place on the FBI’s Ten Most Wanted List and the rapt attention of the TV show Criminals At Large.

Their new-found celebrity status naturally begins to drive a wedge into their relationship, but it’s the manic housewife, Kate Wheeler (Blanchett), who poses the biggest threat to the Sleepover Bandits. In one of the best entrances of a character on film, Kate belts out Bonnie Tyler’s “Holding Out for a Hero” and “Total Eclipse of the Heart” (alternately labeled “the ultimate sappy chic song” and “an epic haiku to the complexity of love” by Joe and Kate). She is emotionally fraught and finds herself in bed with first Joe and then Terry, creating a complicated love triangle until she announces that she has no intention of choosing between them. Yet what we think will drive these characters apart only strengthens their resolve to hatch a plan that will put an end to the Sleepover Bandits and allow them to finally escape to Mexico and that state of mind they call Paradise.

There are obvious flaws in Bandits. Critics zeroed in on a seemingly haphazard and thrown together script definitely in need of a rewrite and the film’s biggest issue – its overly complex structure, filling in the gaps of a botched robbery with flashbacks from the Sleepover Bandits’ Criminals At Large interview. Levinson’s persistence with the convoluted flashback structure certainly lost some of the audience. Yet no blame can be pushed off on the actors who manage to deliver truly earnest performances. Blanchett reveals herself to be fairly adept at screwball comedy, matching Thornton’s hypochondriac act bit for bit. Levinson has a keen eye for character development and doesn’t allow his buddy heist to devolve into pastiche with uninspiring stereotypical characters. And that’s where the film excels – the heist trope is just dressing for a very engaging character study. Above all, Bandits isn’t deserving of its reputation as Barry Levinson’s last hurrah.