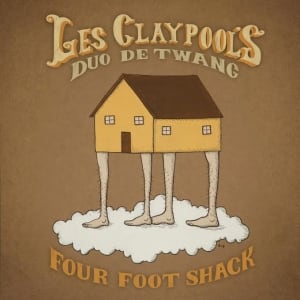 [xrr rating=3.5/5]Even if his name didn’t precede the Duo De Twang moniker, Four Foot Shack would be instantly recognizable as one of Les Claypool’s projects. The Primus bassist’s idiosyncrasies are all over this new record, a collaboration between Claypool and frequent collaborator Bryan Kehoe. The Duo de Twang nomenclature refers to the mostly-acoustic flavor of this newest Claypool solo project, Four Foot Shack focusing exclusively on an array of weirdo country-fried bluegrass recordings – including covers, reinterpretations of earlier Claypool originals and a few Primus tunes, all stripped down and played in a style that sounds like two dudes jamming proficiently in a dusty barn.

Claypool brings more name recognition (and his peculiar brand of charisma) to this project, but both halves of the Duo de Twang are instrumental powerhouses. Claypool’s dexterous bass performances are as dynamic and masterful as ever, yet the minimal style and mixing on these recordings provides Kehoe equal opportunity to demonstrate his chops, weaving intricate patterns through Claypool’s immediately recognizable stomp. Four Foot Shack is an even collaboration between the two musicians that utilizes both of their strengths, though the primary goal was obviously to have a great time playing together, and in that way Four Foot Shack has more in common with Colonel Les Claypool’s Fearless Flying Frog Brigade or Colonel Claypool’s Bucket of Bernie Brains than it does with the more intense Primus records.

Quickly moving past a brief intro, the album opens with a dramatic re-imagining of the Primus hit “Wynona’s Big Brown Beaver,” closing the record with a take on “Jerry Was a Racecar Driver” to close the record. While both Primus songs are pretty jaunty and country-tinged in their original forms (the freaky cowboy getups in the video for “Wynona’s Big Brown Beaver” can’t be unseen), these versions play up that flavor to varying success. This rendition of “Wynona’s Big Brown Beaver” removes some of the original’s volatile momentum along with the volume, the bass line bouncing along simply, but this actually allows the song’s bare essentials to shine through. It works well because the original is such a great track, and this version is just significantly leaner. The cover of “Jerry Was a Racecar Driver” changes up the original arrangement too much, basically slapping the lyrics on a breakneck fingerpicking jam. This change suits the overall style of Four Foot Shack but does nothing for the song.

Claypool is no stranger to covers, including a number of unique standouts on Primus’ Rhinoplasty EP or the song by song Frog Brigade take on Pink Floyd’s Animals. Four Foot Shack features six covers not including the Primus originals, including standout takes on Jerry Reed’s “Amos Moses” (a Primus favorite) and the Alice in Chains hit “Man in the Box.” While “Amos Moses” saunters along in almost exactly the same way as Primus performed it, “Man in the Box” is a version of the song refracted through Claypool’s warped musical prism, bending the song into barnstorming rocker that simultaneously plays up the original’s moaning vocals and completely replaces the metal chug. It comes up just short of parody, which makes the song all the more memorable. Other covers include tracks originally written by the Chantays (the surf classic “Pipeline”), Johnny Horton and Tom Connors, whose powerful story song “The Bridge Came Tumblin’ Down” is another highlight played straight by Claypool and Kehoe. Sadly, the speedy Duo de Twang version of “Stayin’ Alive” is fun at first, but ends up being downright annoying as Claypool replaces the falsetto refrain with a series of animal grunts he can hit. At least he nails the instrumentals.

Surprisingly, Claypool’s own songs are the least consistent element here, including cuts from multiple Claypool solo albums and other projects. The first Live Frogs set still features the best recording of “Hendershot” to date – with its mix of Eastern tones, ’60s surf vibe and gigantic solos – but due to the duo’s technical playing, this new version comes close. The flattened take on (Of Whales and Woe) funk track “Rumble of the Diesel” is a live recording of a northwest performance, and includes some wonderful banter with the crowd about fishing, a recurring theme across Claypool’s discography. Songs like “Red State Girl,” “Boonville Stomp” and “D’s Diner” aren’t any less bizarre arranged for guitar and acoustic bass than on their earlier Claypool recordings, but the songs themselves stand up to the change. Claypool original or not, the Duo de Twang certainly manages to make all of these songs sound like they could have been twangy bluegrass all along, which is an achievement worth hearing.