Bells Are Ringing is right along the lines of Kismet, a lark of a Broadway adaptation crammed with clever lines and subtle jabs at censorship but ultimately not much more than a bunch of talented overactors singing in well-lit sets. After a massive winning streak which included his previous two serious dramas, the still highly-regarded Some Came Running and Home from the Hill, and only two years after his big hit Best Picture winner Gigi, Minnelli may have wanted to sit back and rest on his laurels a bit. The result is perfectly enjoyable piece of fluff with the occasionally-noticeable touches of a master.

Judy Holliday (in her last movie role before succumbing to cancer) plays Ella Peterson, an operator for a very 1950s telephone service called Susanswerphone, which people use to screen customers’ phone calls or as an alarm clock or just for a little lonely-hearts cheering up. Ella’s particularly talented at it – she pitches her voice and changes her demeanor to suit the needs of whoever is using the service – which is good for her job security because the company is a fly-by-night operation barely hanging together in the sweaty basement of a New York brownstone, though it advertises itself as classy. Nonetheless, she’s asked to tone down her meddling in customers’ lives and just answer phones, because her flourishes seem to be leading the service into financial straits. And that’s before the dandyish boyfriend of Susanswerphone’s owner invests in the company only to use it as a front for his comically insidious bookie empire. 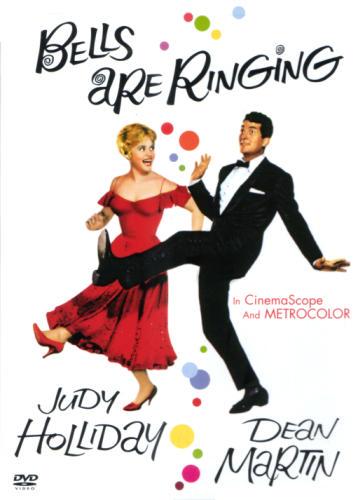 Dean Martin, meanwhile, plays a Broadway musical writer named Jeffrey Moss, and he’s suffering from severe writer’s block, fueled by his alcoholism (it is Martin, after all). He uses Susanswerphone to talk to a woman he likes to call “Mom,” who is of course in actuality Ella doing one of her voice-roles, and get a bit of encouragement before he tries to sit down and type. Through a screwball series of mix-ups involving the New York vice squad, who for some reason are convinced that Susanswerphone is an escort service, Ella winds up in Jeffrey’s apartment giving him face-to-face writing encouragement. They fall in love, the cops circle, Ella unwittingly bungles up the bookie’s plan to use Susanswerphone for a front, and nothing approaching actual danger ever comes close. It’s as rosy a story of a poor struggling talented woman falling for an alcoholic hack as ever graced early 1960s movie screens.

Minnelli was always a master of certain things, like camera movements and set design and color schemes. And clearly when given terrific material – and it could be dramatic or comedic, didn’t matter – he was able to bring it palpably to life. But here he can only put his brilliant staging to so much use; even the songs that made hits out of a stage piece are lackluster, with only Holliday really looking like she’s giving her all. Given fluff, he can only be cheeky, drop his in-jokes and his jabs at censors (the vice squad goons believe they’re onto a nonexistent crime while a real and much bigger one is operating under their noses), and let folks carry on with their showpersons’ talent.