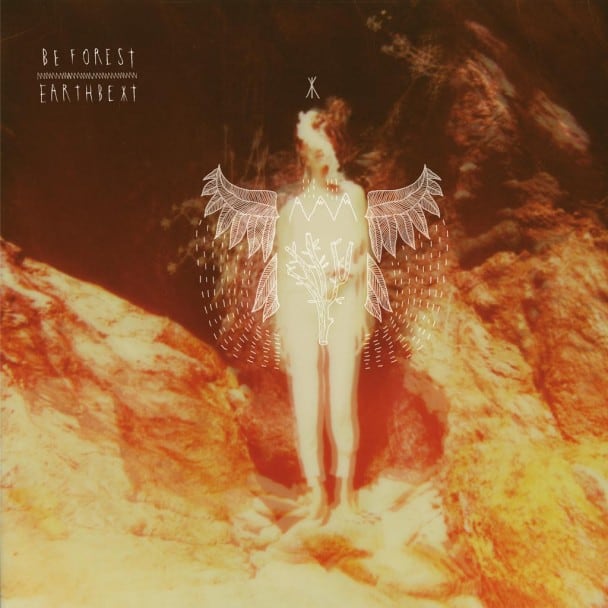 [xrr rating=3.0/5]Be Forest pulls against themselves, fighting their own nature. The vocals float above everything, wrapped in gauzy wisps of flickering reverb, but the dreamy atmospherics are anchored by insistent, earthly rhythms. Like an ethereal saint tempted by pleasures of the flesh, the beat challenges all attempts to disengage. The band’s aspirations of reaching a higher plane are dashed time and again, whether it’s the dance-friendly beat of “Colours” or the tribal drumming behind “Airwaves,” but that conflict is what makes Earthbeat worth seeking out. Moody dithering alone can be mildly interesting, but adding tension and resistance lays down the bones of a story. And story is particularly important here because lyrics offer little connection, even on the non-instrumental tracks where the vocals are hard to distinguish.

The conflict at the core of Earthbeat becomes immediately apparent on the opening track, “Totem,” whose heartbeat beginning asserts the physicality of the project. The guitar comes in, so swaddled in echo and soft-focused flange that the texture resembles a keyboard wash. Multiple layers weave together over a blur of bass, building in tempo and energy. The melody is thoughtful but the simple tom and stick-work are implacable, asserting that some things are unchangeable.

Aside from the dynamic tension between beat and breath, Be Forest is adept at painting different sonic landscapes. Where “Totem” is reflective, “Ghost Dance” harnesses a more nervous energy. The stark rhythm and reverb-soaked guitar riff evoke the wide open Western skies. A Native American flute echoes the earnest line of the guitar and sets up Costanza Delle Rose’s dreamy voice. The piece could work like a soundtrack item from “Twin Peaks.” The echo-laden melody sounds like something Angelo Badalamenti would write and Della Rose neatly fills in the Julee Cruise vocal part. As a guitar spins in place around itself like a dancer, it becomes a focal point, absorbing all of the wishes and regret that a life could contain.

That interpretation is fully based on feel, rather than lyrical details. For the most part, it’s hard to tease out specific phrases. “Captured Heart” offers an exception, with a great opening line, “I would like to fall in love/ And then have a broken heart.” Delle Rose sings her lines like a thoughtful goddess daydreaming of the allure of surrendering to mortality. Her tone is soft and cottony, but it’s undercut by tight drum loop syncopation that indicates the trap of that thinking. After some ambiguity and hints of darkness, the chorus concludes, “We saw far and now we’re dust.” The overall feel of the song is danceable post-punk, but I really liked the opening riff that fittingly recalls the Smithereens’ “Behind the Wall of Sleep.”

The best track on Earthbeat, “Airwaves,” also makes a vintage reference, this time to Joy Division’s “Transmission.” Be Forest borrows their inspiration’s melodic bass, tribal drums, light keys and guitar accents to drive the upbeat post-punk dreaminess. Shards of guitar create a mirror maze that draws the listener into a hypnotic groove. But it’s a Sufi-style head trip; the drums propel the piece and encourage a dervish dance of capitulation. This Italian band may long for an escape to otherworldly, utopian planes, but the visceral attraction of rhythm will always have some hold over them.