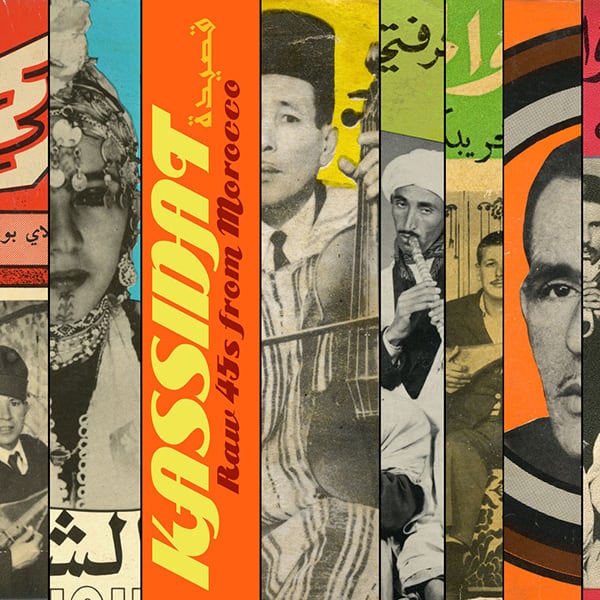 [xrr rating=4.0/5]Moroccan music, or Arabic music in general, can be bewildering to the uninitiated. The cadences of the language are guttural and abrupt, the instrumentation can sound off, the rhythms of the music itself are complex and unfamiliar. This six-track sampler from Dust to Digital goes a good way towards rectifying all that. Kassidat: Raw 45s from Morocco presents a half dozen tunes from various regions of the country, exemplifying varying musical styles and lyrical concerns, all culled from the blooming of the country’s independent recording industry in the 1960s and ’70s. As a starting point for an interested listener, it’s an outstanding compilation, albeit a short one.

Numerous musical styles are represented here, as outlined in the thorough (and much appreciated) accompanying booklet. These styles include the chaabi of the indigenous Berber people, the rwais of the southwest, the music of central and northern Morocco, built around the gunbri, an indigenous stringed instrument, the female vocals of the ‘aita style, and an example of early rai. Nowadays, rai is the Arab world’s best known musical export, with superstars like Cheb Khaled releasing densely-packed albums produced by Don Was and selling out stadiums in Europe. In the early days, though, rai was a very different beast: consisting solely of a vocalist and a flute and percussionist to back him up, the music focused on social commentary and a devotional tone.

The rai song on this record, Abdellah El Magana’s “Kassidat el Hakka,” (“The Poem of the Truth”) is a standout, a sparse but propulsive composition marked by urgent vocals and hypnotic flute, with some handheld percussion banging way in the background. It’s not too much of a stretch to hear some early inklings of hip-hop in this music, with its focus squarely on vocals and beat. And el Magana’s tight-wound delivery is enough to make me wish I understood Moroccan Arabic.

Great as it is, though, “Kassidat el Hakka” is by no means the only good song here. “Ha Howa Ha Howa” (“That’s Him”) brings the female vocals of Cheikha Hadda Ouakki to the fore in a plaintive, lamenting swirl of fiddle, handclaps and percussion, while Rais Haj Omar Wahrouch injects lightning-quick vocals and lotar (a kind of banjo) into “Aksaid Wili Moudanine” (“Ask Our Brothers the Immigrants”). The back-and forth call-and-response vocals between Wahrouch and his female backing singers creates a hypnotic rhythm that carries the song effortlessly through its five-and-a-half-minute running time.

Closing track “Sidi M’Bark” (“Mr. M’Bark”) utilizes the distinctive sound of the zamr, a double-throated clarinet made of cow’s horn that will remind some Western listeners of the Indian shehnai, or snake-charmer’s flute, while a thumping percussion propels the whole tune with an irresistible, booming energy. Vocalist Cheikh Mohamed Riffi utilizes a full palette of whoops, slides and full-throated hollers while belting out lyrics that are, apparently, hedonistic in nature. According to the accompanying booklet, the provenance of this tune is something of a mystery—Riffi is from the north, but the song shares more in common with the music of Algeria to the east—but what the heck, it’s a great tune.

With such a strong set, the only real criticism that can be leveled at this compilation concerns its length. At only six tracks and a running time of less than 35 minutes, it feels a bit skimpy, and the listener can’t help wondering what else is out there. Certainly there are issues of copyright and availability to contend with, but it seems likely that another couple of tracks could have been pulled together for a fuller, more satisfying sampler. However, if the worst criticism one can offer of a record is “I wish it were longer,” then that’s the sign of a pretty strong set.