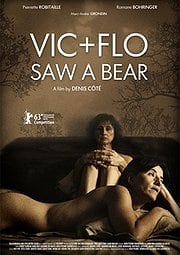 [xrr rating=3.75/5]The cold blue-greens that shade Denis Côté’s static shots in Vic + Flo Saw a Bear seem to slow down the particles of what the camera captures. People stand and walk as if they had just been woken from a too-short nap, and dialogue is often delivered in a brusque annoyance that gives the impression of withholding details not to be secretive but because the sheer effort of maintaining a conversation is too much hassle. It is a passive-aggressive thriller, in which emotional and expositional thrusts are only half-spoken aloud, indirectly chiding any confused viewer for not paying enough attention, even for things that occurred before the camera ever latched on to these people.

Even the setup is cagey, with details that percolate onto the screen, with each cut altering the flow of the movie before any clear path is even established. Victoria (Pierrette Robitaille), a 61-year-old who moves to live with her disabled, diabetic uncle (Georges Molnar), barely settles in before a shot introduces, without warning, her parole officer Guillaume (Marc-André Grondin), an easygoing fellow whose friendliness cannot fully overcome his court-mandated invasiveness. Similarly, a sudden jump to Victoria under the covers reveals Florence (Romane Bohringer), her ex-con lover. As if cutting down a film twice as long to only its essence, Vic + Flo manages to whittle out all the extraneous parts, even as its measured pace and reserved interaction lends even the most plainspoken moments an air of mystery.

By reducing everything to a blunt, context-less state, the film can play liberally with several subtexts without ever having to hitch itself to any one post. When the couple, who show total neglect for Vic’s uncle, are faced with Guillaume’s offer to put him in a home where he will be better tended to, the angry responses of the women hint at wounded pride and, without ever openly claiming discrimination, a feeling of being judged on the grounds of their sexuality, a reaction proved not unreasonable by the more inexplicably venomous depredations delivered by other caregivers . (Elsewhere, these two moods are visually alluded to in the form of a faded rainbow hammock Vic strings up in the woods, a getaway from the internal stress of their relationship as much as external concerns.) The huffiness is compounded by Flo’s bisexuality, with Vic’s jealousy spiking with any complimentary thing Flo says about a man and Flo herself betraying a sense of hurt and indignity when she spots the stranger she hooks up with one night entertaining another woman when she drives by him later.

The film never lapses into total ambiguity with these readings, but it leaves enough for the audience to work out that tension arises from treading down any one path, hoping that one’s own interpretation matches up with the film’s general direction. But never mind theme when time and place itself are sometimes warped to nuanced but disorienting effect. Confronted by a mysterious, initially friendly woman named Marina (Marie Brassard) about Flo running up a huge bar tab for a party to which she was not invited, Vic stomps off into the background to get the money her partner owes, but when the camera cuts to follow this purposeful motion, it is suddenly nighttime and we are following Flo into the bar as she desperately tries to pay off her debt before Vic can find out about it. Similarly, when “Marina,” revealed to be another person and someone who shares a dark past with Flo, rouses the woman from her hammock. A close-up of the jittery, terrified Flo abruptly axial cuts out to show her tied to a tree as she is set to be beaten. This minute flouting of expectation charges even the tenderest moment with nervous energy, so that a grisly climax that comes seemingly from nowhere can in its gruesomeness offer a small relief from the psychological mire offered up by the actors and the direction.

An obvious peer of the film’s is Sean Durkin’s Martha Marcy May Marlene, another backwoods, frigid indie thriller in which, for all the threatened and delivered violence, denial is the worst horror. But where Durkin’s debut too often drew attention to its maker’s impressive aesthetic talents at the expense of fleshing out its haunted narrative, Côté’s movie strikes a humbler balance between the two. It may never reach the palpitation-inducing terror of Martha Marcy May Marlene, but the film is spry enough not to get bogged down in any excessive explanation, and its subtly mismatched cuts generate a subliminal unease over direct fear, a path too few movies of this genre effectively chart. But then, even though the final horror of the film directly stems from the return of the past, Vic + Flo is less about the cyclical vagaries of fate and trauma than the more disturbing randomness of it all. Had the film ended before its final 15 minutes, it would primarily be a movie that illustrated that the simple act of living can be as confusing and unknowable for a sexagenarian as it is for a teenager. Even with the conclusion it has, Vic + Flo is less about the nightmare of one’s path leading right back to a terrible starting point than the notion that there may be no path in the first place.