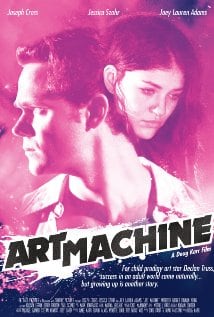 [xrr rating=1.5/5]Mom, the art world and society are the villains in the ridiculous coming-of-age satire Art Machine.

Set amid the current art and music scene in the Bushwick section of Brooklyn, the movie is competent but thoroughly unconvincing. The script comes off as a piece of self-justification from a sheltered adolescent with little to experience of life or art. With embarrassing slogans and a badly miscast lead, Art Machine‘s hour and a half doesn’t have a fraction of the wit found in the 12-minute episode of the satirical TV show Eagleheart “Exit Wound the Gift Shop”. That was an art-world satire even more scathing than the Banksy documentary that inspired it.

We meet Declan, the titular art machine, in flashback. At six-years old, the art prodigy’s mother (Joey Lauren Adams) is already exploiting the boy’s talents, selling his canvasses for hundreds and then thousands of dollars. A heavy-handed narration points out that the young Declan was shuttled not to soccer practice but to photo shoots for art magazine cover stories.

Even in an age where people are regularly suckered in by human interest stories, a look at Declan’s paintings makes this hype unrealistic. They’re ordinary, competent portraits and still lifes, nothing that would look out of place hanging in a big chain hotel room. We are supposed to believe that throughout Declan’s adolescence his mother has been able to support herself in New York with the proceeds of this valuable creative commodity. The art market may be full of overvalued, overhyped players, but I see nothing in Declan’s paintings that would catch the eye of this cynical art market, especially not in New York, the supposed creative capital of the world.

There’s a provocative idea or two behind this concept. Does America commodify and exploit its creative class, or worse, its own children, just to make a buck? Sure it does! But if there’s scathing commentary in Art Machine, it’s hidden beneath posturing that isn’t that of the creative artist, but of the adolescent who feels he’s being kept down by The Man.

Declan, now seventeen and played by Joseph Cross, narrates, and like much narration in movies he tells us things we can already see. His eighteenth birthday is just a few months away, and at this crossroads in his life, he has a coming-of-age exhibition at a Brooklyn gallery. Declan’s mother is of course sleeping with the gallery owner (Damian Young) to ensure that her son has a spot.

The screenwriters clearly have mother issues. In one interview with six-year old Declan, a reporter asks about the boy’s favorite thing to paint. His answer is, “Whatever my mom tells me to.” Art Machine is full of heavy-handed, cringe-inducing dialogue. When Declan meets the free-spirited Cass (Jessica Szohr), she’s just set off a pyrotechnic art project on a Bushwick rooftop, and he asks if she’s hurt herself. She answers, “We’re all a little hurt.”

The script is a huge problem, but the casting fails too. Declan is supposed to be seventeen, but he’s played by an actor ten years older, and who looks it. Cross is not the first actor to be cast in a teenage role he’s too old for, but his high forehead and boyish features aren’t boyish enough to convey the character’s vulnerability. This is a young man whose life was dictated to him from an early age, and first-time director Doug Karr doesn’t instill in him any sense of being trapped in someone else’s world.

That world isn’t drawn with any vividness either, though not for lack of trying. When Declan meets Cass’s friends, a supposedly subversive artist’s group, he’s immersed in a world where young people play music and make the kind of art they want to make – the sex, drugs and rock’n’roll dream. But there’s nothing edgy about the way they live their lives, and nothing alluring about the dream.

Another thing about the world they live in. The Bushwick part of Brooklyn was not so long ago a rough neighborhood, but you wouldn’t know it from the sanitized view of Art Machine. You’d barely know you were in one of the greatest, most vibrant and diverse cities in the world. The movie’s Bushwick looks like what many New Yorkers feel Mayor Bloomberg turned the great metropolis into: a theme park.

If cheap slogans like, “Whatever is subject to origination is subject to cessation” are your idea of a deep artistic statement, you’ll love Art Machine, but I wish it had been better. I love New York, a city that’s sometimes enough of a character in itself to elevate a mediocre movie. I love walking through New York’s small art galleries – even if I don’t find something I like, there’s an excitement and diversity of vision that’s addictive. And I love coming-of-age movies too; even mediocre examples can strike a familiar chord of awkwardness and growth, promise and discovery. Art Machine, alas, captures none of this.