October 19, 2020
Home Music Band of Horses: Acoustic at the Ryman 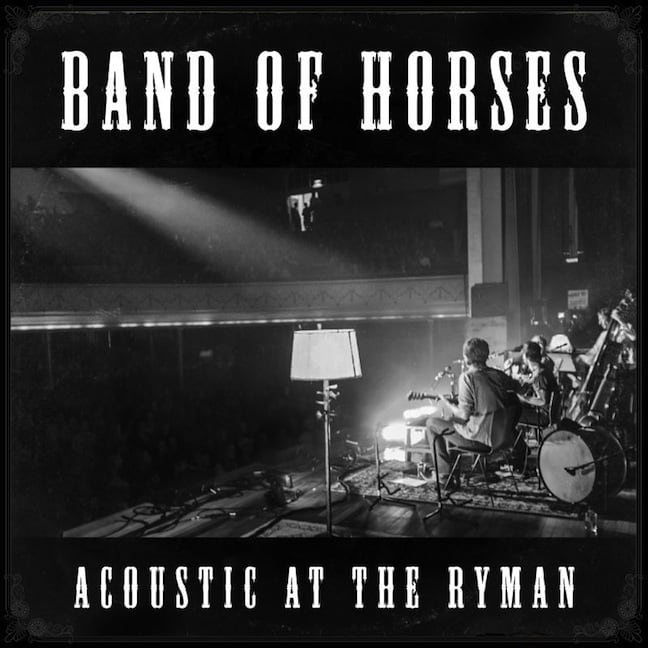 [xrr rating=3.25/5]In many ways, Band of Horses are so well suited for an unplugged album, it’s surprising it look this long for such a document to manifest. Sure, each of their four albums shows they are more than capable of rocking out when the mood strikes, but even considering this, their aesthetic innately lends itself to an acoustic setting. The vocal harmonies, delicate melodies and interwoven guitar picking reveal the acoustic bedrock the songs arise from. Though their tunes are captivating with the electric sheen and clear production, stripped of these embellishments, the band’s brand of alt. country-Americana breathes and unfurls in a naturalistic, relaxed form. Acoustic at the Ryman, then, is like a return to a rural locale after time spent exploring a cosmopolitan city.

At the same time, because of the material’s acoustic-leaning lineage, the 10-song setlist doesn’t afford much in the way of surprises, either in the songs’ iterations or the specific selections. For the fans, the true gem of the record is not any particular cut, but the loose, off-the-cuff flow of the performance and the intimate recording that showcases the nuances of fingers sliding on strings and slight imperfections in harmonies. Recorded in the iconic Nashville venue in April 2013, the Ryman itself is a presence here.

The piano plinking and warm strumming of “Marry Song” herald the show. The tune spreads out serenely, as if drifting lazily on a summer breeze, Ben Bridwell and his compatriots singing vignettes of lackadaisical optimism. Contrasting with this sentiment is immediate successor “Slow Cruel Hands of Time” from the band’s 2012 LP Mirage Rock. With the vibe of driving through a familiar location that’s been reduced to a desert, the somber tune is a swirl of existential reflection and fatalistic resignation. When the harmonies join Bridwell on the second verse, the nostalgia lands a direct hit.

With numbers “Detlef Schrempf” and “Factory,” the contrast of the first two cuts is juxtaposed in individual songs. The former is built around metronomic piano notes and is given an ominous edge by a rumbling cello, Bridwell’s voice going for consolation where none might be had. With the latter, the cello returns to buzz along and offset the piano and vocals that yearn for a bright spot. Lyrically, cryptic observations and ideas of lonely alienation abound, yet the melody, which particularly shines in this setting, can’t help but grant a degree of comfort, bolstered by resolution in the closing lines of “I feel awful and I believe/ Time gets wasted in this misery.” On the more up-tempo end are “Older” and “Everything’s Gonna Be Undone,” both saturated with a rustic twang that makes them natural bonfire singalongs. With the latter, Bridwell’s higher vocals take a backseat to Tyler Ramsey’s lead duties, while “Older” ends with an outro of a capella vocals and hand clap rhythms.

The most drastically reworked songs here are “Wicked Gil,” altered from a drum-heavy rocker to a more haunting ballad, and “No One’s Gonna Love You.” Now, that second one has always been something of anomaly. It’s overly sentimental, with lyrics cloying and wince-inducing for their aversion to any subtlety; it’s like a Hallmark card set to music. Yet it transcends what should be limitations, and is somehow just damn good. The slick and grandiose rock ballad qualities of the studio version are absent, the song reduced to Bridwell’s shaky falsetto and a lone acoustic guitar. For the most part, it makes the paean more affecting, but it also makes it stray even closer to being mawkish in its tenderness.

Unfortunately, the album’s most notable missteps arrive in the final two songs. The distinctive piano melody of “The Funeral” elicits the biggest reaction from the audience, and everything starts fine. But it simply fails to build and sweep up the listener as does its studio counterpart. The components are all there, but it feels forced and falls flat, and only leaves you itching to revisit the original. Finale “Neighbor,” as it does on Infinite Arms, goes for the classic album closer, and just as it did with that album, it feels overwrought. It tries for folksy accessibility, but it’s too obvious and general to be successful, and the recurring line name-checking Bartles & Jaymes is still cringe-worthy in its awkwardness.

Ending aside, Acoustic at the Ryman is at once a treasure for fans and the most apt introduction for those unfamiliar with the group’s work. All of Band of Horses’ studio albums are represented here, the setlist amounting to a condensed best-of compilation without being overly long. As such, it fills the roles of a retrospective for fans and a concise sampler for novices.