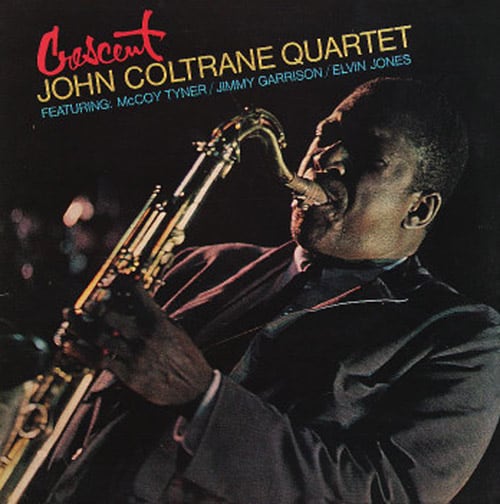 Saxophone titan John Coltrane’s discography—both as leader and sideman–is so colossal that it’s a wonder there is any agreement among critics, musicians and fans as to his greatest works. Indeed, there are some Trane titles that tower above the rest, serving as landmark moments in his multifaceted career and excellent jumping off points for those wanting to dive into the musician’s deep, intricate waters. Critics have written exhaustively about the soulfulness of Blue Train (1957), the harmonic complexities of Giant Steps (1960), the unlikely pop accessibility of My Favorite Things (1961), the tenderness of Ballads (1963), the spirituality of A Love Supreme (1965) and the avant-garde audacity of Ascension (1966).

1964’s Impulse! recording Crescent ought to be mentioned in the same breath as these tried and true masterpieces, yet the record has rarely gotten the attention it deserves. This omission might be partially due to the timing of its release. Crescent, arguably Trane’s darkest, most meditative record, was cut in the spring of 1964. Only a few months later, Coltrane, with the same classic quartet he worked with on Crescent, would go into the studio to record A Love Supreme, an album whose influences have been felt not only in jazz but in the realms of rock, classical, soul, gospel and world music. The latter record is so universally beloved that the former record, one that shares many of A Love Supreme’s most attractive qualities, is sometimes cast aside as a curious precursory to a masterpiece rather than a fully developed work in and of itself.

This misconception can be easily corrected after only one spin of Crescent. Coltrane and his accompanying trio (Jimmy Garrison on bass, Elvin Jones on drums and McCoy Tyner on piano) might be the tightest, most interactive combo in the history of jazz, and Crescent is one of the finest examples of an evolving, breathing jazz ensemble we have on record. Coltrane reaches new heights of melodic and rhythmic subtlety on this disc, and there is no doubt that it is the saxophonist’s show. Nevertheless, each of the other band members not only are essential collaborators and supporters to the leader but are also given their own moments in the spotlight. Notably, Trane doesn’t even take a solo on the record’s entire B side.

The opening title track starts with a sweeping, free-form rumination that sounds a lot like the way A Love Supreme would open in just a few months. The tune settles into a medium-tempo swing groove that never ventures away from the minor-key melancholy established at the tune’s start. Trane lays down one of the most sensitive, thoughtful solos of his career. Though the saxophonist had been experimenting for the past few years with his “sheets of sound” approach, one in which he tried to outline multiple inversions of each complex chord change, here he is restrained at first in his approach. He plays plenty of notes, but his virtuosic licks are tempered with short, melodic ideas that echo “Crescent”’s main melody. Trane uses rhythmic motifs to structure his solo, playing the same rhythmic ideas repeatedly in the mode of a drummer rather than a horn player. Tyner notably drops out about halfway through the saxophonist’s solo to give him some space as his ideas become melodically and harmonically more complex.

The second tune, “Wise One,” reaches a level of beautiful sublimity that rivals anything in Coltrane’s vast catalog. After a mellow McCoy Tyner introduction, one that recalls the impressionistic playing of Bill Evans on Kind of Blue’s “Blue in Green” and “Flamenco Sketches,” Trane joins with a spare, yet complex, melody, and Elvin Jones uses the cymbals in a particularly expressive manner. In Tyner’s solo, the pianist uses block chords to develop short rhythmic motifs in the manner of Coltrane from the previous track.

The up-tempo “Bessie’s Blues” is the only track to counteract Crescent’s overall melancholy and is also the only tune the clocks in at less than seven minutes. Tyner and Trane both make use of reliable blues licks in their solos. The pianist proves himself particularly adept at using triplets and double-time figures for rhythmic variety.

“Lonnie’s Lament,” which gives us one of Coltrane’s most mournful yet complex melodies, features Garrison taking on five minutes of solo bass (as in, everyone drops out, and it’s just him playing). Despite the limited sonic palette on display for these minutes, Garrison manages to engage the listener through playing accessible melodies and echoing Coltrane and Tyner’s artistic approach to rhythmic motifs.

“The Drum Thing” takes Crescent in a pleasantly surprising, strange direction. The record ends with a track that highlights Elvin Jones’ African-like tom-toms and Coltrane’s penchant for exotic melodicism. Here we have a saxophone-drum format for the first half, with Garrison only playing one note on the bass to anchor the tune in tonality. The duet texture predates Coltrane’s later avant-garde experimentations on 1967’s Interstellar Space with drummer Rashied Ali. Trane and Garrison gradually drop out, leaving us with Jones’ multi-tempo, poly-textured solo playing.

As much as it’s tempting to laud Crescent on a technical level, to praise four musicians who were performing at their prime, it is important to remember that jazz is about feeling not just technique. Crescent might just be one of the most accessible entries into Coltrane’s vast discography because it establishes a consistent mood and allows its dark, warm sounds to wash over the listener. Much like Miles Davis’ Kind of Blue or In a Silent Way, it’s a mood record, one whose melancholy infects the listener’s soul and doesn’t easily let go. This ability to convey human emotion so effectively is why the four men on this record are not just virtuosic musicians but superb artists.