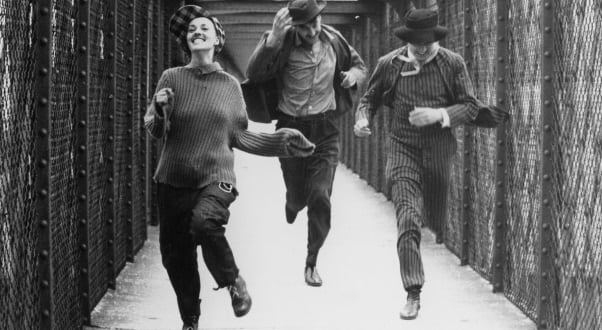 Jules and Jim, Francois Truffaut’s 1962 film, stands as one of the most acclaimed of the French New Wave of cinema, which is a little odd when you think about it. Though it is intensely representative of the brash, youth-oriented film movement to rise in post-World War II France, it also stands at the point in time which Nouvelle Vague was arguably peaking and itself becoming a dominating force in European (and eventually, Hollywood) film. That is to say, while Jules and Jim is perhaps most the film at which the New Wave and its director, one of the movement’s brightest stars, ceased to be a reaction to a cinematic regime and become one themselves.

But none of that means that Jules and Jim, re-released by the Criterion Collection, is a poorly constructed or even stupidly lavish film; though it marks a tipping moment in a movement, this is not New Hollywood’s Heaven’s Gate or One from the Heart. Plot-wise, the film even seems remarkably old-fashioned and refreshingly simple. Essentially, the titular protagonists (the former an Austrian newcomer to Paris, the latter the Frenchman who befriends him) discuss philosophy and poetry, pick up girls and are separated by World War I. Just prior to that, the shy, retiring Jules (Oskar Werner) strikes up a relationship with the mercurial but beautiful Catherine (Jeanne Moreau, in one of the defining roles of both her career and the movement). Jim (Henri Serre), the travel-writing, womanizing foil to Jules’ relative timidity, eventually falls in love with Catherine and over the course of the film, infidelities, pregnancies, possible marriages and other vagaries of love occur. 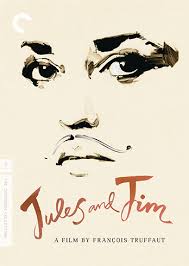 While leaving the still startling denouement of the film spoiler-free, Jules and Jim is far more concerned with the relationships between the central trio than with plotted action, the bulk of the film being conversations and monologue. Although much of this could be tied to the source material (Henri-Pierre Roché’s novel of the same name), it’s also telling that at this stage in his career, Truffaut felt comfortable enough to shrug off at least some of the Hollywood homage/pastiche that he and contemporary/sometime partner/rival Jean-Luc Godard had made theirs. It feels like a film in which the creator knows that he is arriving at an apex of confidence, allowing him to essentially break even his own innovations. While the visual style of the film is all Truffaut, filled with unmistakable dynamic jump cuts and sudden shifts in third-person perspective, he also overlays the film with frequent narration for exposition, explains motivations and time-shifts that would be complete unknown otherwise. It’s one of the film’s few weaknesses (at least from a storytelling perspective), but it’s also strangely refreshing to see what was already an old-fashioned device being comfortably embraced by an iconoclast. Contrastingly, it’s equally as refreshing that Truffaut’s idiosyncrasies being established as trademarks; while the iconic freeze-frame effect he used so monumentally for The 400 Blows was the final masterful note, here it’s used as a quick character effect in a delightful brief scene demonstrating the differences between sorrow and laughter.

And that might be the key emotions that can be used for Jules and Jim: sorrow and laughter. The honesty and openness of the titular duo is the kind of relationship that is difficult to find in cinema or even life; supportive, complementary and not without a trace of occasional tension, Werner and Serre have the kind of bond that’s rare and intuitive (and doesn’t forget to make wonderfully subtle usage of their pronounced physical dissimilarities). And although their attraction to Catherine may be understandable, it’s also invigoratingly irritating to basically see the trope of “crazy bitch with issues” be used to such equally sympathetic and abhorrent ends. When all three are together (which is frequently), they are generally framed with the title characters flanking the glamorous, troubled Catherine. It’s easy to perceive her as standing between, as separating the duo through her very existence, but equally valid to see her as their true connection and coupling.

Jules and Jim is a masterpiece, validated both by its dated style and attributes and what they were becoming. It is a film by a revolutionary coming into power, whose methods were becoming as valid and recognized and recognizable as those he had superseded. It is the work of innovation reaction becoming its own style.

(This review first appeared on Spectrum Culture at an earlier date)