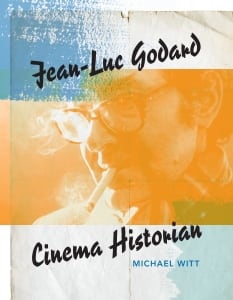 [xrr rating=4.5/5]Jean-Luc Godard has many masterpieces to his name, quite a few from his long period of critical neglect following his first abandonment of theatrical cinema in the late 1960s. But his magnum opus is, without question, Histoire(s) du Cinéma, a four-and-a-half-hour series of videos made over the course of a decade. In it, the director uses a barrage of film clips, stills, painting reproductions, literary text, typed titles and Godard’s own narration to craft an obscure, personal account of cinema, its place in art history and a judgment of its shifting aesthetic and moral value. Godard’s late period is defined by its open intellectualism, its complex and self-analytical play of images and sounds, which are often pitted against each other and, in separated stereo tracks and overlapped frames, themselves. Histoire(s) takes that practice to its extreme, using its collage of copyrighted material to forge a truly original work, one that doubles as the ex-Cahiers du Cinéma writer’s greatest piece of film criticism.

As such, it is incredibly difficult to follow even for the initiated, to say nothing of those who might be tempted to forgo dipping their toes into Late Godard for full immersion therapy. This makes Michael Witt’s Jean-Luc Godard: Cinema Historian, a summary of the series’ background, its core themes and some of its most pertinent quotations, one of the most vital film books of recent memory. The first thing that becomes apparent when reading the book is how much Witt put into it: the author draws from decades of Godard interviews and lectures to lay the background for the series, treating the director’s recorded statements as if they were part of his filmography. That is generally a dangerous tactic, but it is striking how many ideas and rhetorical devices Godard puts forward years before he begins the series make appearances in Histoire(s) as theses, and how some of his early criticism pops up in his selected clips.

As Witt argues early on, Godard’s career, regularly divided into rough periods of work, is really of a giant, constantly evolving whole, and Cinema Historian demonstrates how lines and practices in earlier and concurrent film and video works reveal Godard’s overarching philosophy, be it the exploration of video’s potential for real-time visual critique pioneered by Godard’s first collaborations with Anne-Marie Miéville to the manner in which the director’s denunciation of his own early, celebrated work recurs in some of the main criticisms he levels at cinema in the series. For example, practically everyone knows Godard’s classic pronouncement, “All you need for a movie is a girl and a gun,” but a 1989 interview Witt quotes grounds one of the more caustic charges Godard levels at cinema in Histoire(s), that “Cinema is an ideology based on men living out through their imaginations what they could not do to women.” The chauvinist who openly played out his marital problems with Anna Karina in their collaborations of the ‘60s now excoriates the male gaze for diverting cinema from its true potential as a revolutionary artform.

Themes such as this, as well as Godard’s indictment of cinema’s failure to account for, or even record, the Holocaust, can be gleaned from a single viewing of the series, but Witt’s book helps to show how deep these critiques go with concentrated examples. More importantly, Witt’s citations of other critics, philosophers and art historians in relation to their influence or parallels to Godard offer a prism through which to view Histoire(s), as a work that attempts an unorthodox, but hardly unprecedented, approach to history, one that chases the essence of truth, which is experienced and thus must be rendered subjectively, over a catalogue of facts. Indeed, one of the best aspects of Cinema Historian is its transcription of some of the cut-up text pasted onto frames of the series, rendering them with line breaks that turns the befuddling on-screen text into what it truly is: poetry. In giving viewers a hand at sussing out some passages, Witt also valorizes the work’s potential to move, a reminder that Godard’s abstruse methods do not preclude the beauty of his montage and the sorrow with which he regards cinema’s wasted potential.

Jonathan Rosenbaum once aptly compared Histoire(s) du Cinéma to James Joyce’s inscrutable masterpiece Finnegans Wake, and with Cinema Historian, it finally has its own Skeleton Key. As with Joseph Campbell’s indispensable companion, Witt’s book is not an attempt to explain every or even some of the nuances of written and visual language that can make a single second of Godard’s series hopelessly dense. Rather, it provides a bedrock of context that primes the viewer. Witt’s research is impressive, from his wide citation of Godard’s interviews and statements to the unenviable task of identifying and explicating a number of the series’ endless literary, artistic and cinematic quotations. But this is all just a preamble to approach Godard’s work; the great discovery of the series’ rich allusions, multilingual puns and earnest sincerity is still up to individual response. Witt just makes the prospect of checking the series out, or returning to it for further study, that much more appealing.