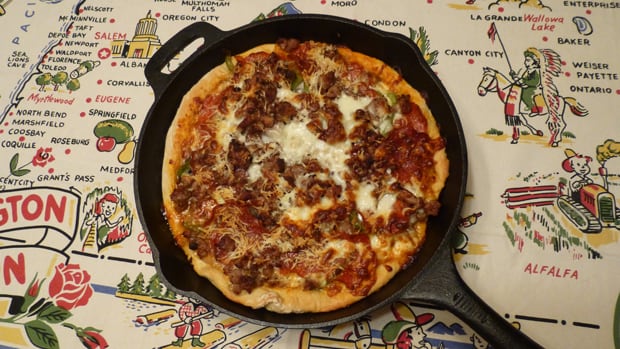 I have no pizza affiliation. I’ve never been to Chicago or New York, and the also-ran California-style pizza (any trendy flavor on thin crust) hardly seems worth aligning myself with. So the wars that flare up between pizzas are mostly a good opportunity to see Jon Stewart’s Brooklyn accent rather than assert one team over another.

To be honest, I like both.They’re too different to share a name, one being more homey casserole and the other quick, easy street food. I like New York-style pizza when I’m in a hurry, like a weeknight or when I need to feed a crowd with the simplest to eat and please option possible.

Okay, what USED to be the easiest to please option possible. Thanks, gluten free mania, for ruining our lives.

But I digress. When I want something elaborate, decadent and indulgent, I want to make a deep dish pizza in my cast iron pan. It takes more time to prep and cook, and more time to burn off at the gym. Still, the buttery crunch of a pan-baked crust and the fork requirements make this deep dish pizza satisfying in a fashion all its own. It’s like the difference between a plate of spaghetti and chicken carbonara. Both delicious, both foiled by gluten free bullshittery. Whatever. Enjoy, and let them eat rice flower cake.

In a Kitchen Aid mixer with the paddle attached, process flour, sugar and yeast until combined, about 10 seconds. With the machine running, slowly add the water and process until the dough is just combined and no dry flour remains, about 20 seconds. Allow it to rest for 10 minutes.

Add oil and salt to dough and process until dough forms satiny, sticky ball that clears the sides of the bowl, about a minute. Switch in the dough hook and knead for about another minute. Turn off the machine, shape the dough into a ball and lightly coat with oil (about a teaspoon). Roll the ball so it is covered in oil and then place the bowl in the refrigerator for at least 1 hour.
While waiting for the dough, heat 1 Tbsp of vegetable oil in the cast iron skillet on medium high and sauté the onion, bell pepper and mushrooms until just beginning to wilt, about 5 minutes. Remove from pan, which is now oiled and ready for the dough when you are.

Remove the bowl from the fridge and, on a lightly floured surface, roll out with a rolling pin as thin as you can stretch it without tearing. Don’t be afraid to use your hands after you’ve gotten as good as the rolling pin will take you. Drape into the cast iron skillet and press up and around the sides. Ladle ½ cup of pizza sauce onto the bottom of the crust and spread evenly around. Top with 1/3 of the cheese, then half of the pepperoni, sausage, and pepper/onion/mushroom mixture. Top with another 1/3 cup of cheese, repeat the meat and veggie layer, and then top with the remaining cheese.

Bake for 25 minutes at 400 degrees. Remove the pizza from the oven, then brush the butter around the edge of the crust. Sprinkle with the onion powder and seasoning, then allow to cool for 10 minutes before serving.