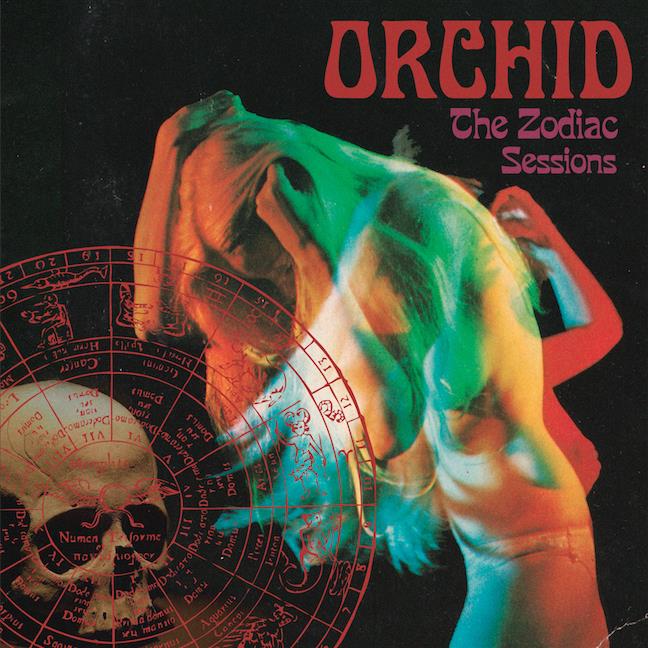 [xrr rating=3.75/5]There’s something of an old-school metal revival happening right now on both sides of the Atlantic, and most of the young bands involved have a lot more in common with the genre’s late ’70s origins than the last few decades of increasingly challenging fragmentation. Even more than Germany’s Kadavar or Sweden’s Graveyard and Witchcraft (all bands that are on Nuclear Blast’s impressive roster), American doom metal outfit Orchid recalls Black Sabbath’s Ozzy years and the early Pentagram records, a stoner-rock inclined metal sound that is as much psychedelic tribute as it is wholesale imitation.

Orchid formed in San Francisco in 2007, and Nuclear Blast is re-issuing their 2009 Through the Devil’s Doorway EP and 2011 debut record Capricorn as The Zodiac Sessions. While Orchid’s sophomore album The Mouths of Madness proved to be a more original take on the same proto-metal style Orchid explore here, these first two offerings are hopelessly, raucously sincere, and the band’s influences are immediately apparent. Theo Mindell’s vocals careen dangerously around these gigantic sustain-drenched melodies, his voice either an angry incantation or shredding wail, coming off like a crazed hybrid of Ozzy, Lemmy, Bobby Liebling and Ian Gillan. Orchid’s rhythm sound hits all of the expected touchstones: that buzzsaw grind on “Eyes Behind the Wall,” Capricorn” and “He Who Walks Alone,” the deliberately passive bass intros on “Black Funeral” and “Son of Misery,” leaden stretches of pulsing murk on “Cosmonaut of Three” and “No One Makes a Sound,” and the big warbling bass all over “Down Into the Earth.” Rare is the contemporary doom metal act that doesn’t borrow a bit of the catastrophic volume and monolithic lurch of Electric Wizard or Sleep, but while heavy and raging, Orchid’s influences seem to end circa 1975. The four EP tracks that close the album are especially indebted to those hallowed titans.

Even though Orchid’s bong-fueled lyrics are often expectedly silly, as is the band’s admirable desire to favor a historic style that long ago evolved into an array of vibrant subgenres, The Zodiac Sessions works due to the charisma and precision of the band’s attention-grabbing performances. Orchid fronts like guitar-rock gods on the perfectly simple “Eastern Woman,” this collection’s “Sweet Leaf” by a wide margin. “No One Makes a Sound” spends most of the song’s runtime galloping from one melodic change-up to the next, focusing on a downtuned solo that could have been lifted directly from Master of Reality. Orchid fairs especially well when they combine that urgent raging with mammoth doom grooves that tremor beneath the melody, as on the belligerent Capricorn title track. When it comes to the frequently repetitive world of metal, originality isn’t the only approach. With The Zodiac Sessions Orchid justifies a reverence for the past by making songs that rock just as hard.