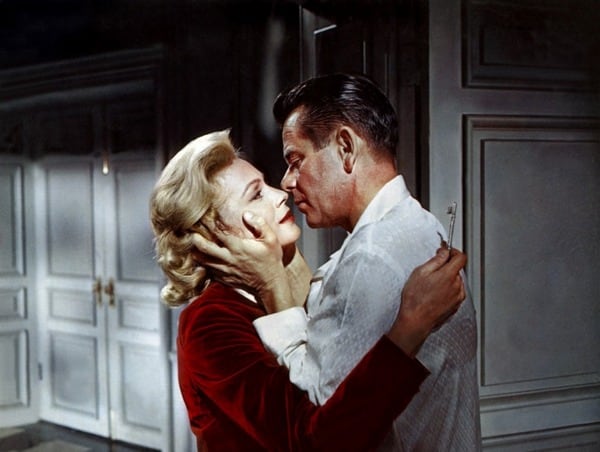 The best Vincente Minnelli movies are about movement. Sometimes this occurs in an active sense: Gene Kelly and Leslie Caron dancing on the banks of the Seine, Spencer Tracy holding down his kitchen bar against an army of drink seekers, characters ping-ponging across crowded frames whose fluid density takes on its own seething character. But even in quieter scenes, in movies that have no ostensible relationship to frantic activity, there’s a constant frisson at work, a tension between objects and humans, between dueling characters, within people whose tensions are impelled outward by violent internal unrest. As the musical genre lost steam and Minnelli focused more on large-scale dramas and comedies, these subtler moments became more frequent, allowing films like Some Came Running and Two Weeks in Another Town to whip into a hectic, confused boil within otherwise conventional story structures. It’s why Kirk Douglas is the standard-bearing star of the late Minnelli era, always agitated, always vibrating with a sort of disconcerting energy, threatening to topple over into hammy theatrics but somehow holding the course.

Four Horsemen of the Apocalypse is undoubtedly a movie with many of these same movement-based characteristics. A sweeping epic, it covers a healthy span of time, involving a character pushed in several different directions by his own feelings, his familial obligations and the weight of a greater ancestral legacy. Spanning Argentinean mansions, Parisian restaurants and Nazi fortresses, it’s full of sumptuous set design and inspired, subtle action within those sets. But what the film lacks is an equivalent application of that movement, a reproduction of it that feels analogous to its design.

Without it the film begins to feel stifling and over-serious, the sort of dry dramatic rendering mocked with such spritely glee in The Band Wagon. A lot of this has to do with Glenn Ford, one of the classic nice guy actors of the Western genre, but also a certified milquetoast, definitively lacking the capacity to tear through the fusty upper-crust setting. It’s demonstrative to look at what Douglas did with a similarly stuffy prestige-pic part in Lust for Life, how his manic energy both identified and exploded that film’s focus on external aesthetic reproduction of internal turmoil, boldly exhibiting the torturous process of creation. 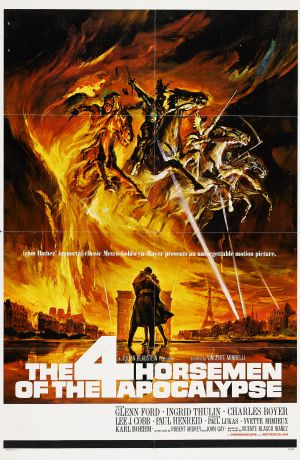 Yet it’s not only Ford’s fault that Four Horsemen sags. There’s also John Gay’s flowery script, which leans too heavily on big declarations and offers little space for subtle contemplation. The heavy, sententious story of a man discovering the strength of his principles, it plays like Casablanca puffed up to 140 minutes, with all the shadows and menace wiped clean. The scion of a famously neutral Argentine family, Julio Desnoyers (Ford) nonetheless inherits a healthy dose of vim-and-vigor from his spirited grandfather Julio Madariaga (Lee J. Cobb) who goes into a frenzy upon finding out his grandson Heinrich (Karl Böhm) has turned Nazi, then promptly expires, prefiguring the wave of evil that will soon sweep over all of Europe.

The German invasion is at first just a nuisance for the Paris-dwelling Julio, who sticks to his disinterested playboy lifestyle, getting in a few swipes at Nazi officials while still going out to dinner with his cousin, now a high-ranking officer in the occupying army. He even picks up with Marguerite Laurier (Ingrid Thulin), who’s married to one of his father’s close friends, a committed activist art collector who’s functionally Julio’s opposite. Etienne Laurier (played by Paul Henreid, further cementing the Casablanca connection) goes off to war, then gets sent to a German prison camp, which does nothing to discourage Julio from pursuing the affair with his wife. This bad behavior is meant to forestall our realization of his internal goodness, the conflict on which the entire film hinges, but Ford is such a mild presence, and the film has such an allergy to actual meanness, that there’s no real threat of him surrendering fully to the dark side, or even remaining neutral for very long.

The film improves as Julio is radicalized, pushed by increasing Nazi brutality to discover his true, heroic self. There’s a nice rhythm to his increasing Resistance involvement, but Minnelli’s set design background, usually a cushy companion to his fleet-footed direction, acts as further padding on an already overstuffed story, granting a 19th century period piece feeling to events that took place less than 20 years before this film was released. Some scenes, like a brief, jarring set piece in which Julio murders a Nazi official in a crowded Metro station, are thrilling, but these feel pulled in from a different, grittier movie. Immobilized by too many mediocre elements, Four Horsemen never really gets moving, pinned under the weight of its own decorous respectability.