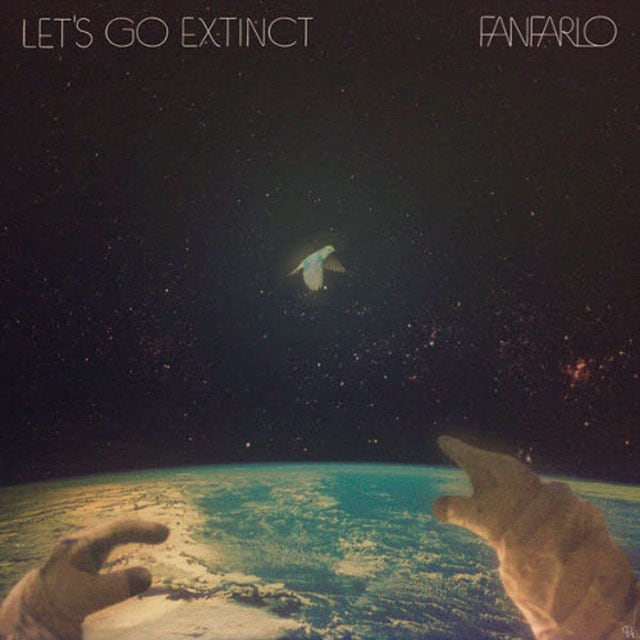 [xrr rating=3.0/5]What does a third album sound like from a band whose first album was a successful mashup of folk and indie rock and whose second album was all synthetic baroque-rock? Why a combination of both sounds by way of the ‘80s, of course. Fanfarlo’s Let’s Go Extinct wasn’t expected, but there is a logic to the band’s process. Sophomore album Rooms Filled With Light was a disappointment for the band, so it makes sense to return to the folk pop of Reservoir. And the four-track EP The Sea released last year gave hints as to the London-based outfit’s new direction. The EP showed an encouraging move toward thoughtful synthpop, a sound unrecognizable to the early Fanfarlo, and Let’s Go Extinct delivers that in droves. Fanfarlo have combined rousing strings and brass with ambient synths to create yet another new sound and one that they would do well to stick with for a few years.

In addition to a change in sound, Let’s Go Extinct sees Fanfarlo return with a change in lineup. Drummer Amos Memon recently left the band and was replaced by Valentina Magaletti. The five-piece is now comprised of Magaletti, Justin Finch (bass), Leon Beckenham (trumpet, keyboard), Cathy Lucas (vocals, violin) and Simon Balthazar (vocals). And perhaps this change will only foster more invention on albums to come. For now, Let’s Go Extinct tantalizes with unbridled experimentation and the possibility that Fanfarlo may finally have a solid breakthrough.

Fanfarlo’s strong suit has always been their ability to craft orchestral pop arrangements. They regularly use an array of instruments including trumpets, saxophones, musical saws, mandolins and glockenspiels. Add to this extensive use of synths and you have a truly complex and malleable sound. This musical diversity is fully on display on Let’s Go Extinct, featuring prominently on “Grey and Gold,” “Painting with Life” and “Cell Song”. The latter is an early standout with subtle horns ingeniously built around a dreamy synth scale. “Painting with Life” transitions from section by section to ultimately include nearly a full orchestra of sounds, from an intro of quiet guitar plucking and fluid violins to a percussion-laden chorus with edgy electric guitars, flutes and horns.

The vocals by Balthazar and Lucas are a highpoint of this album. Album opener “Life in the Sky” showcases just how well Lucas’ and Balthazar’s vocals complement each other. Yet the track remains the only time on the album that Lucas’s warm backing vocals are put front and center alongside Balthazar’s. Elsewhere on the album, Lucas makes an impression but is still second fiddle to Fanfarlo’s frontman. Balthazar, however, only takes one opportunity – on “Myth of Myself” – to carry a song entirely by himself and manages to present the most emotional track on the album.

What strikes you most about this album is the influence of ‘80s synthpop. Tracks “A Distance,” “We’re the Future” and “Landlocked” populate the middle section of the album with an abundance of infectious saxophones and space-age synths. Carrying over from The Sea EP is “A Distance,” a song that prompted the band to dub their new direction “Space Opera meets Spaghetti Western.” “We’re the Future” immediately follows, picking up the oscillating synth line that just screams “We’re travelling through the stars.” Changing pace slightly, “Landlocked” features a subtle slide guitar effect as a backdrop to Balthazar’s Bowie-inspired vocals.

For such a brash album, Let’s Go Extinct ends relatively quietly. The title track showcases the cerebral themes of the album in surprisingly hard hitting lyrics “The world will go on without us/ And the dust will rearrange itself.” And if that’s too depressing for you, just return to track one and re-experience the ‘80s space-synths all over again. Let’s Go Extinct may not be groundbreaking, but it is a success for Fanfarlo, a band threatening to live perpetually on the periphery of contemporary pop music.