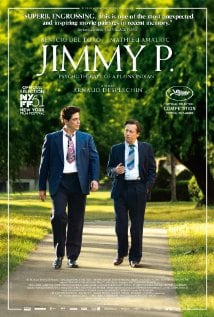 [xrr rating=2.5/5]Arnaud Desplechin’s best films are deft works of tragicomedy, his idiosyncratic visual schema meshes with charming, understated acting that gives just enough impression of roiling traumas under the surface that their eventual journey to the fore is jolting but not a sucker punch. For his first English-language film, however, the French director drains all the humor from his frame, along with much of the color. The story of a Blackfoot WWII veteran, Jimmy Picard (Benicio Del Toro), undergoing psychoanalytical treatment for debilitating mental trauma, Jimmy P.: Psychotherapy of a Plains Indian adopts the bleached-out palettes that self-consciously signify “realism,” a distancing aesthetic that uses, or at least tries to use, its cold light to illuminate a buried truth of a valorized, mythologized recent past.

With Jimmy P., this distance befits its clinical setting, but it also hints at the swift displacement from Jimmy’s POV to that of the objective default, which in American society, especially that of 1948, is white. Shipped to the Menninger Clinic in Topeka, Kansas, for evaluation of various physiological torments he believes stem from his fractured skull, Jimmy is cleared of physical malady by the head trauma specialists who proceed to set him up with psychiatric evaluation. Subtly playing up how alien Jimmy’s darker skin is among the white staff and patients and the washed-out cinematography, the doctors feel that he cannot be treated by any usual therapist, instead calling in George Devereux (Mathieu Amalric), an anthropologist whose knowledge of the Mojave is considered close enough to be able to relate to Jimmy’s Blackfoot culturization. ”We have an Indian patient who, in terms of our usual criteria, may conceivably be psychotic,” a staff doctor writes to Devereux. “At the same time, it is possible that we may be mis-evaluating his psychiatric status since he may be merely an Indian.”

It is in these subtle deconstructions of the continued tension between Native life and white bafflement at the Other that the film is at its best. Co-written by Desplechin, Julie Peyr and the great critic Kent Jones, Jimmy P. regularly positions Jimmy’s ethnic heritage as a foundational context for his mental displacement, as well as the manner in which he is spoken for even by the well-meaning Devereux. In their first session, in fact, the anthropologist appears far more interested in adding yet another language to his polyglot arsenal, asking what the Blackfoot word is for this and that, and whatever kinship the two might share as outsiders (Devereux is a Romanian Jew displaced geographically and religiously to Paris and Catholicism, then to America to study indigenous tribes) is uneven, due to the white man’s ability to exist comfortably in all areas. By and large, Devereux assumes command of the film when he arrives, not only drawing out Jimmy’s memories and dreams but almost protesting when Jimmy’s more modern behavior clashes with what the man has read of Blackfoot culture. His reliance on textbook descriptions of primitivism even when confronted with a more complicated, real person before him adheres to Hollywood standards of filtering any and every minority experience through the prism of an enlightened but relatable white even as it mocks this practice.

For the most part, though, the film gets bogged down in its two-hander plot, with the majority of scenes devoted to sessions with Jimmy and Devereux that act less as revealing portraits of internal, social and racial factors informing a person’s mental health than as competing showcases for its two leads. That could have made for great cinema, but neither star is at his top level: Amalric, so animated, so uncontainable in his other work with Desplechin, is subdued here, sublimating his magnetic presence into his ability to drive all of the sessions to the point that he becomes purely functional. As the nearly catatonic Jimmy, Del Toro has a reason to be even more reserved, but his laconic, punctuated speech is a parody of his usual mumbling style. His words steadily but haltingly flow out of him like an IV drip, generating the film’s only dramatic tension in the question of whether viewer interest will last to the end of one of his meandering talks.

Occasionally, Desplechin’s tics shine through. He visualizes Jimmy’s migraines with blinding white spots all over the lens, blurring out the image and silently communicating agonizing pain. The chromatic production design only makes some of his wilder edits and camera moves more apparent, as when the image leaps from a confining, blue train compartment to its yellow corridors, or in the gently twirling shots that take in patterned wallpaper at the clinic and similarly embroidered furniture, generating a false sense of homeliness so exaggerated it only doubly reminds the viewer that this takes place in a controlled medical facility. An included clip from John Ford’s Young Mr. Lincoln plays to the director’s cinephilia but, more pertinently, connects another piece of revisionist/reinforcing historical myth that also links the unseen effects of war (not yet come to Lincoln in Ford’s film, but having already wreaked their impact on Jimmy in Desplechin’s) to adolescent desires and fears of women. It is in dredging up such sexual hangups, however, that Jimmy P. too often finds a conventional psychological explanation, never delivering on the more complex, socially externalized mental statement it sets up in its deftest passages.