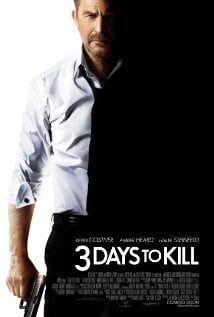 [xrr rating=2.5/5]Luc Besson is a cinematic treasure. While he’s never amassed a great deal of critical respect, the man is one of the giants of action movies; he creates movies that, at their best, are distinctive, stylish and above all, simple. Movies like The Professional, Nikita and The Transporter are not dense films, but they move with a beautiful efficiency of violence and as few moving parts as possible. When 3 Days to Kill opens, it has all the hallmarks of a good Besson film: an assassination attempt against a stylized villain called the Albino (Tómas Lemarquis), a beleaguered and grim anti-hero and an immediate leap into gun battles and shattering glass.

Unfortunately, it’s not a Besson film. 3 Days to Kill was co-written by Besson (with Adi Hasak), but is directed by McG, the filmmaker behind the Charlie’s Angels movies and This Means War. As such, it follows CIA agent Ethan Renner (Kevin Costner, for some reason growling out all his lines) as he dips in and out of two very different movies. One is a gritty, heavily stylized spy film with heavy doses of skintight leather and torture. The other is a comedy about a father trying to reconnect with his daughter Zoey (Hailee Steinfeld) after years of absence. More often than would be expected, the two manage to overlap pleasingly. It’s by no means seamless (very much the opposite) and contains about three subplots more than really necessary, but it skirts by on Costner’s charisma and some decent fight scenes.

The ostensible hook of the film is that Ethan is diagnosed with a fatal form of brain cancer and has only a short time to live. After being retired from the CIA, he travels to Paris to reconnect with his estranged wife (Connie Nielsen) and daughter, but is pulled back into a hit on the Albino’s boss, who is named the Wolf (Richard Sammel) because one cartoonishly named villain wasn’t enough. But Ethan’s illness is really a non-issue for the majority of the film. His CIA handler (Amber Heard) provides him with an experimental cure as long as he works for her, which works perfectly except for multiple moments in which it doesn’t, which happen to coincide with the times that he catches up to each of his targets.

It is plot devices like the spontaneous resurgence of the drug side effects that threaten the tenuous grasp 3 Days to Kill has on its story. It doesn’t help that in addition to his assassination work, Ethan has to have a romantic reconciliation with his wife, teach his daughter to ride a bike, befriend a family of African squatters that have almost nothing to do with the rest of the movie and deal with the advances of his handler in a progression of wigs and sexy outfits. There’s far too much at work to be truly successful in any particular area, even if there’s moments in each.

3 Days to Kill feels unmistakably like an attempt to revitalize Costner as an aged badass, like Besson did for Liam Neeson in Taken. But it works far better as a comedy of a CIA man trying to balance his work with family, particularly when his job involves alternating interrogating a lead and getting his advice of how to deal with a teenage daughter. As a spy movie, it’s only intermittently successful, in large part because even in his prime Costner didn’t really come off as an action star but was rather a nice guy who could throw a punch sometimes. He doesn’t embarrass himself here, but 3 Days to Kill is carried by his persistent affability, not by his ability to kick ass.