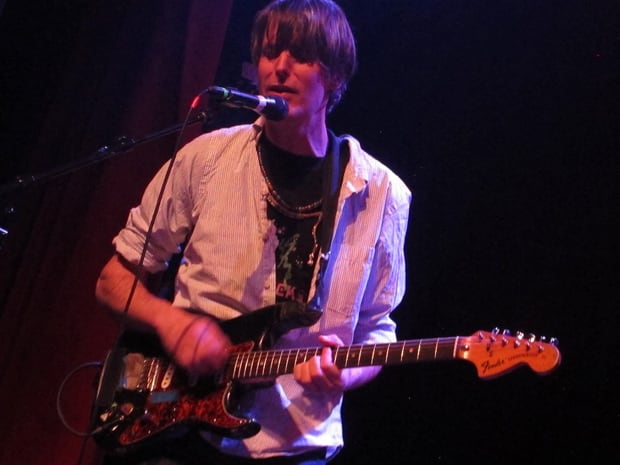 Step one for rock show domination: soften up the crowd a little. Detroit punk trio Tyvek took on the task with ferocity. Although the Gothic was fairly sparse when they opened the show, they thrashed their hardcore hearts out. While the rhythm section held down the throbbing darkness and frantic beat, frontman Kevin Boyer flailed away at an old Silvertone guitar that had been to Hell and back. The audience swelled over the course of their set, but seemed patient enough to appreciate the fresh young blood and their noisy assault.

The obvious second step would be for Stephen Malkmus and the Jicks to come out and ride that energy, maybe digging deep in their back catalog for something suitably punchy, like “Dark Wave” from 2003’s Pig Lib. Instead, the band followed a Jujitsu strategy and led off with “Tigers,” a quirky pop gem from their last album, Mirror Traffic (2011). From there, they quickly moved into material from their newest release that came out just last month, Wig Out at Jagbags. Over the course of the show, they’d eventually play most of that album, only skipping a couple of tunes (“Chartjunk” and “Surreal Teenagers”). The new material continues tempering the wilder experimentation of the band’s earlier work, but that shouldn’t be mistaken for formulaic dullness. While the studio versions are polished, their live arrangements took plenty of liberties with the songs to transform them, whether by slipping into jam band digressions or letting the solos drift off the reservation into off-kilter dimensions. That was most evident on their performance of “J Smoov;” it captured the recording’s restrained ballad feel, beginning with a similar jazzy guitar intro, but the second solo mutated the piece with a trippy post-rock jam of heavily echoed guitar and dreamy keyboards.

It’s become a common refrain to note that Malkmus has been playing with the Jicks for longer than he was with Pavement. All of that time could explain why he seemed so much more relaxed and content on stage in Denver, but the more likely reason was that he has created a perfect home for himself with the Jicks. Rather than a posturing as a rock god, he was content to shrug into the role of ironic slacker. His stage patter was improvised and occasionally awkward, but delivered with equal amounts of sincerity and nervous diffidence. He had clearly picked up on some local character, so he could strain for connection with the crowd, “Cherry Creek is cool. Do you all skateboard there?” Of course, it was arch enough to showcase the irony. Still, Malkmus was most comfortable in the middle of a song, whether bouncing on his toes to the beat or slinging his guitar behind his head for a flashy solo. As the controlling pivot point in the band, he could abandon himself in spinning angular riffs or spiral in on an echoing melody, confident that the other players would provide the structure and the balance.

This doesn’t mean that they were delegated to mere supporting roles, though; the other three musicians each made strong contributions to the show. Aside from Joanna Bolme’s solid bass work – she anchored the dangerous shadows of “Shibboleth” and drove the time signature changes on “Spazz” –she had a strongly grounded presence, offering the occasional sarcastic remark or well-timed flash of amusement as commentary. Opposite Malkmus on the stage, the versatile Mike Clark effortlessly shifted from guitar to keys, often during the same song. He maintained a casual aplomb whether locking in with Malkmus on intricately aligned twin guitar leads or contributing a fluid synth run. He also added his own humorous touches. At the end of the closing song, “Forever 28,” the band was winding down and Clark shifted his keyboard part into the familiar changes for Styx’s “Come Sail Away.” Drummer Jake Morris immediately picked up on this and started to sing the refrain, inspiring the crowd to join in. Morris had already provided most of the backing vocals during the set.

The encore featured “Asking Price” and “Stick Figures In Love,” which Malkmus described as their own two-song equivalent to “Come Sail Away.” Then they covered Steve Miller’s “Swingtown,” building it into a Southern-fried jamfest. The last entry on the set list just said “Pavement,” which was another sign that Malkmus has come to terms with his old band. For this night, they rocked their way through “Box Elder.” With the crowd clamoring for more, the band had a quick meeting to pick one last song to close out this first show of the tour. They took their positions and counted it out. The whole hall recognized “Baby C’mon” from the opening riff and swayed along. It was a perfect “Happy Ending” from the Jicks.