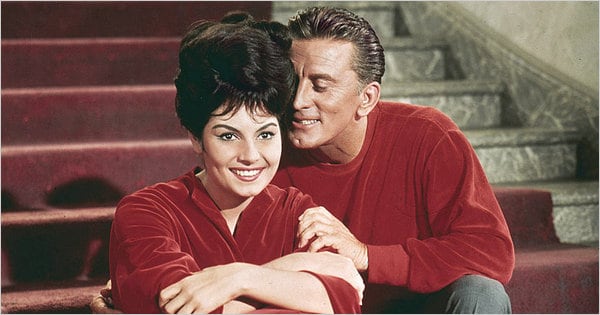 Vincente Minnelli’s Two Weeks in Another Town (1962) makes no secret that it’s essentially a sequel to his classic 1952 The Bad and the Beautiful. Kirk Douglas all but reprises his role from the 1952 film, only as an actor by the name of Jack Andrus rather than a producer. He’s still reeling from a life of bad choices and hard luck. Unlike his Bad and the Beautiful counterpart, however, Andrus is not looking for another comeback. In this movie, the comeback comes looking for him. Director Maurice Kruger (Edward G. Robinson) tracks him down in a mental health facility, offering big bucks for a couple of weeks on a movie currently shooting in budget-friendly Rome. But Kruger had not yet secured the part for Andrus, and unbeknownst to the still-fragile star, as he flies across the globe, Kruger won’t have the time or the money to add a part for Andrus after all. If the producer actually feels any remorse for this, it’s fleeting; he’s the kind of man who always has a scheme at the ready, an easy excuse to manipulate others into doing what he wants.

Two Weeks in Another Town is a far cry from Minnelli’s not-so-distant successes of the late 1950s, lacking restraint and with a host of amateurish technical errors. The crew can be seen in reflections, extras in the background accidentally steal scenes, the same extras are seen in the same clothes on supposedly different days, and the dubbing is dreadful. Actually, the dubbing is a conundrum; Andrus is conned by Kruger into staying on and supervising the dubbing of the film within the film, but because Two Weeks in Another Town is so self referential, it’s impossible to tell if the actual film’s sub-par dubbing is meant to be a in-joke, or is just sadly ironic.

The self referentiality of Two Weeks in Another Town also manifests in a host of similarities with The Bad and the Beautiful. These parallels are immediately obvious, and begin at the film’s opening title screen thanking the Academy for allowing the use of an Oscar statuette. Anyone familiar with Minnelli’s blistering 1952 satire of Hollywood will immediately wonder upon seeing the credit: Whose Oscar is it?

According to historian Robert Beck, the Oscar statuette had been owned by Barry Fitzgerald. The actor made Academy Award history in 1944 when he was nominated for both Best Actor and Best Supporting Actor for the same role. Fitzgerald had the good sense to only win one award — Best Supporting Actor — but the nominations that year weathered a host of complaints, often punctuated by the observation that Fitzgerald received two noms, while Edward G. Robinson, after his stellar performance in Double Indemnity, received none. Many critics had predicted Robinson to win Best Supporting Actor, and were stunned that he received no nomination at all.

Though meant to be owned by Jack Andrus, the award is manhandled by Kruger, played by the very actor many felt was cheated out of that statuette. It’s as Kruger holds this Oscar that he comes up with a scheme to manipulate the actor. Andrus is rightly offended while Kruger, who had been holding on to the Oscar as though it contained the oxygen he needed to breathe, suddenly takes a good look at it and declares, “What the hell do I want with this?” 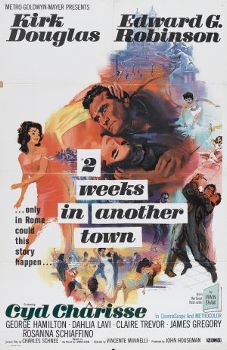 What the hell, indeed. It’s a scene that is as much about Vincente Minnelli as it is about Edward G. Robinson. Though Minnelli used analogues for a host of real-world Hollywood stars in The Bad and the Beautiful, including scavenging the tragedy of Carole Lombard’s death and briefly featuring a singer meant to be his own ex-wife Judy Garland, Minnelli didn’t have the guts to include an analogue of himself. The closest he got was Barry Sullivan’s character, a milquetoast family man who was clearly done wrong, but whose story was always more about Kirk Douglas’ character than about himself.

In Two Weeks in Another Town, Minnelli makes an effort to rectify this, and on the surface, the character of Maurice Kruger seems to posses as much a warts-and-all introspection as anyone in The Bad and the Beautiful. When Kruger betrays Andrus, we can’t help but consider that Minnelli himself may have made similar decisions, willing to sacrifice others for art, less willing to sacrifice himself. But soon Kruger begins to show weaknesses meant to make him sympathetic, and for every heinous thing he does, there is a qualification, someone else who was really to blame.

Perhaps there’s also a touch of a residual defensive reflex in Minnelli after his Bad and the Beautiful experience, when audiences could never quite cotton to the obvious love lavished on anti-hero Jonathan Shields despite his frankly psychotic behavior. Two Weeks in Another Town is crammed to bursting with Bad and the Beautiful references, and after the first act it begins to smell like revisionism, as though Minnelli wanted to repair the reputation of the fictional Shields, or of his own The Bad and the Beautiful. The scene featuring a crazed car ride down a steep Italian hill is no mere callback, for instance, but a perverse kind of gotcha, Minnelli taking what was already melodrama in Bad and the Beautiful, and exponentially increasing the dizzying camp and sheer shrieking frenzy. Maybe it’s a moment of wild abandon, or maybe it’s a virtual middle finger to all the jokes about Lana Turner’s confounding vehicular spin-out in his earlier film.

When Two Weeks in Another Town deploys actual footage from The Bad and the Beautiful, we learn Kirk Douglas is playing Jack Andrus, the actor who is supposed to have played Jonathan Shields in 1952 film. Sure, it’s confusing, but it’s meant to be. Minnelli was never content to merely satirize by holding up a mirror to Hollywood, he wanted to inject himself into that reality, to reshape history by grabbing little bits of the same culture that he couldn’t help but skewer, hoarding tiny pieces of Tinseltown like a dragon hoards his gold. These bits are strewn throughout his films; what were diamonds amongst the debris of the corrupt culture of Hollywood in The Bad and the Beautiful, are only plastic baubles in Two Weeks in Another Town, pretty at first, but quick to wear down and disintegrate into useless junk.

A decade out from his unquestioned masterpiece, Two Weeks in Another Town feels like a desperate attempt to become relevant, to spell out the same things he said before, and said better. The restrained camp of The Bad and the Beautiful fit so perfectly with the subject matter, where Two Weeks in Another Town can’t contain itself and becomes distinctly unappealing. By the third act, when Kruger’s wife confronts him at a restaurant, the camp has been dialed all the way to the level mid-60s-era Edward Dmytryk films, though even Dmytryk never went so far as to include a barely-veiled reference to a handjob, as Minnelli’s film does. After this distasteful scene, there was nowhere to go but down, and Two Weeks in Another Town completely sinks. A forced happy ending and the strange spectre of Erich von Stroheim’s lookalike son solidify the desperation, proving that Two Weeks in Another Town is less a movie than the cinematic manifestation of a director unable to face his impending irrelevance.