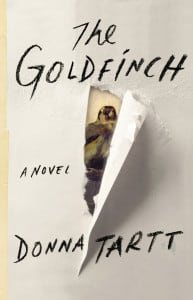 [xrr rating=3.0/5]Nine out of 10 reviews for The Goldfinch by Donna Tartt refer to the tome as “Dickensian,” which isn’t exactly light praise. In the masterful hands of an elegant wordsmith like Tartt, the description isn’t entirely unfounded either. Simply holding the book evokes a bygone era of novel-writing, when a story could take up a lifetime: clocking in at over 700 pages and taking Tartt over a decade to complete, time and weight are self-evident in each copy. Her penchant for long, beautiful sentences with flourishes of detail crown molding feel fresh and reborn in a time of Tweetage and microfiction.

The characters themselves seem like throwbacks to classic literature. Theo, the story’s narrator and antihero, becomes a modern-day scrappy orphan in the style of Oliver Twist, who is taken in by a Miss Havisham-type and her family, the Barbours. Broad strokes of luck and misfortune, coupled with the obligatory eerie coincidence, steer Theo’s life like a raft in the sea charted in parts by cruel fate and in large measure by his own questionable judgment.

The book begins strongly, propelled by urgency and fascinating characters. A middle-grade Theo and his mother visit a New York art museum on a whim, the same afternoon that explosives blow the space apart. As Theo struggles to escape the scene and save his life, he encounters an old man who, in his last living act, entrusts Theo with a family crest ring and a pricelessly valuable painting, The Goldfinch by Carel Fabritius. The ring leads Theo to Hobart and Blackwell, a high-end antique store run by the dying old man and his partner, the furniture-savant Hobie. While trying to connect with this new world of art and collectibles, Theo grapples with his life suddenly without a mother.

Like a natural hustler he skirts the child welfare system, makes inroads with a new family (the aforementioned Barbours) and gets closer to Pippa, the old man’s niece now residing with Hobie, a fellow survivor of the bombing. Just as the pieces are assembling neatly in place, Theo is claimed by an absent father, and life is once again never the same.

Once Theo leaves the warm, polished wood and rainy streetscapes of his New York City beginnings for his father’s new home in Las Vegas, the narrative begins spinning away into less believable characters, less sympathetic behavior from Theo and a structure in desperate need of tightening. The story begins opening a series of new windows into people like Boris, a vodka-guzzling Soviet caricature, and Theo’s father, a not-so-great gambler. The opportunity to delve deeper into these people and reveal surprises is never seized and fizzles away. The story lingers long in the desert with pages and pages dedicated to booze and drugs and aimlessness. As the novel moves forward in time and Theo comes of age, he fails to mature and grow, as evidenced by his juvenile need to hoard The Goldfinch painting at any cost. His relationships with others remain superficial and meaningless. He claims to love two women, Pippa and one of the Barbour girls, but the attraction is never explored past the fact that they’re both beautiful and have a connection to his past. He uses his selfless benefactor, Hobie, with little remorse and no self-awareness. By page 500 or so of this selfish, perpetually adolescent character, the book begins to feel repetitive and dull. It continues to devolve into one of the worst endings I’ve ever read, where complications like theft, blackmail, con-artistry and murder get swept away and tied with a perfect bow.

As a result, The Goldfinch falls short in the ultimate mark of a Dickensian novel—timelessness. By the end of the book, patience and satisfaction depart, and what appeared at the beginning to be a masterpiece loses its emotional connection and authenticity.